Quest For A Trombone Cleaning Rod

Within a few days of starting practice on my vintage trombone, I decided the slide was not moving as freely as it should.  A good cleaning & lube seemed to be the best starting point to clear up the issue.

Although I was familiar with the generalities of brass instrument cleaning from my trumpet-playing days, YouTube was checked just to see if trombones required any sort of special attention.  Sure enough, in addition to a cleaning snake, all videos reviewed followed up with the use of a Trombone Cleaning Rod.   This tool is roughly three feet long, and has an eye at the end for threading on some sort of absorbent material.  The inner & outer bores of the slide are then gently swabbed out with the rod.

The man behind the counter at the downtown music shop was able to sell me the cleaning snake and some slide lube.  But he did not have a cleaning rod, and allowed that, as a guitar player, he had no insight into why one was not in stock.  So I went home and with only the new snake & my mouthpiece brush from 30 years ago and cleaned what turned out to be a very dirty instrument.

While every music store on the Internet had one for sale, the shipping & handling charges were more the rod itself.  My preference was to source the tool locally.

A week or so later, I stopped at a brass instrument repair shop, and was surprised to find they did not keep the cleaning rod in stock either.  While the technician allowed that they had one in their shop, he said the only time it was used was when slides came in gooped with too much of a certain brand of slide cream.  He inclined that, for routine cleaning, he thought a snake was sufficient as long as slide cream was used in accordance with directions.

I then posted a question on a trombone forum asking for insight on the tool’s use.  Of course some people immediately replied “Get one & use it!” without elaboration.  Other members recalled having one, but did not necessarily know where it was.  Some people thought using the tool was worth the effort; others did not.

One guy, though, sent me a message expressing his belief that swabbing after brushing was important, and went on to explain how he had made the tool out of a 3/8-inch wood dowel.  Since I already had woodworking tools, and a dowel was only 98₵, this appeared to be the way to go. 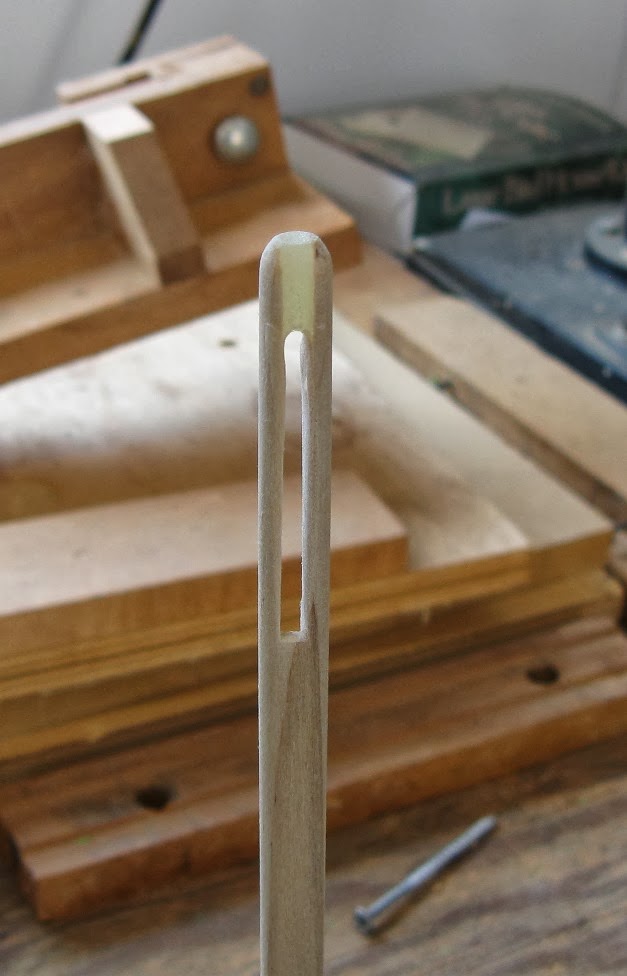 Sadly, it was not meant to be.  The dowel was so close in size to the inner bore that I all but could not get a paper towel in.  The helpful forum member’s trombone must have had a bigger bore because he said he used the modified dowel with patches of old sweat clothes. 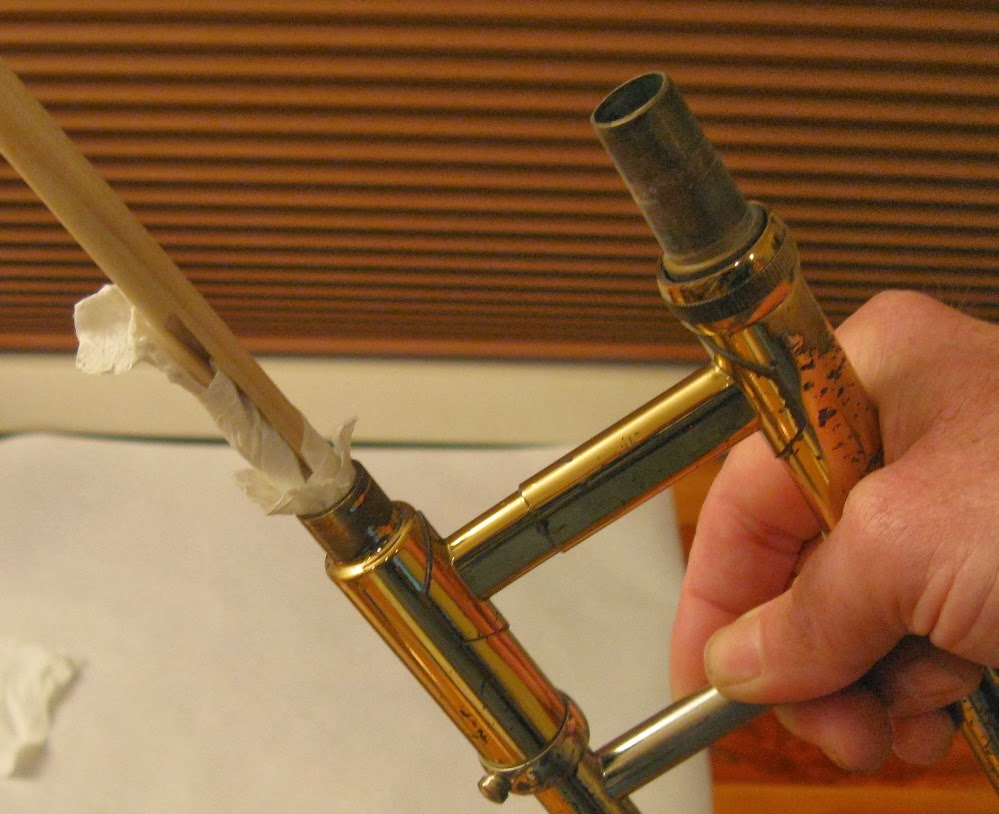 Looking around the shop, I found an old brass welding rod.  But milling a slot in the end was going to be an issue. 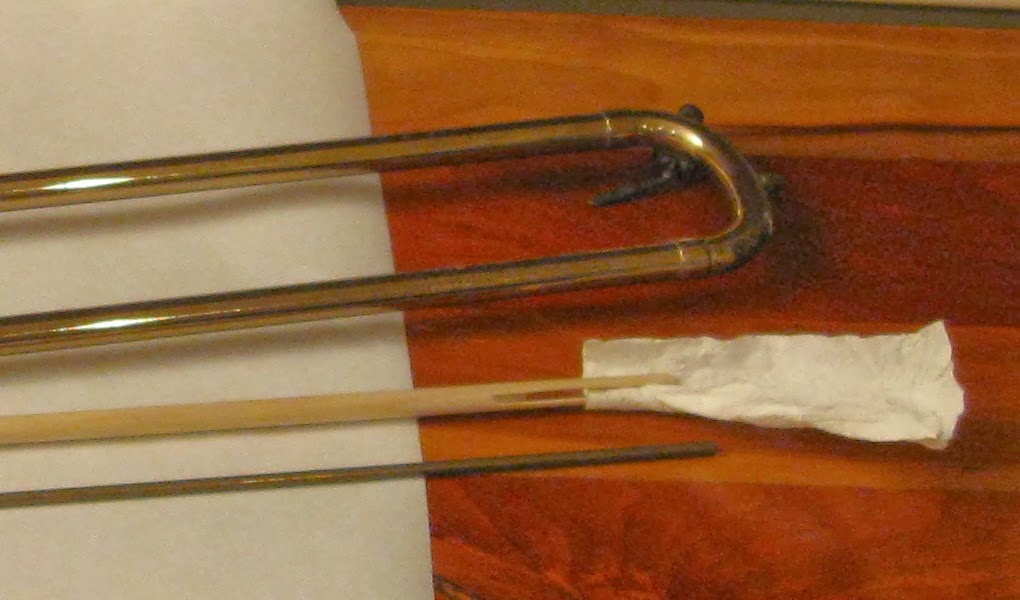 Then I remembered another fellow posting that he used the rod that came with his shotgun cleaning kit.  Hey! I’ve got one of those! 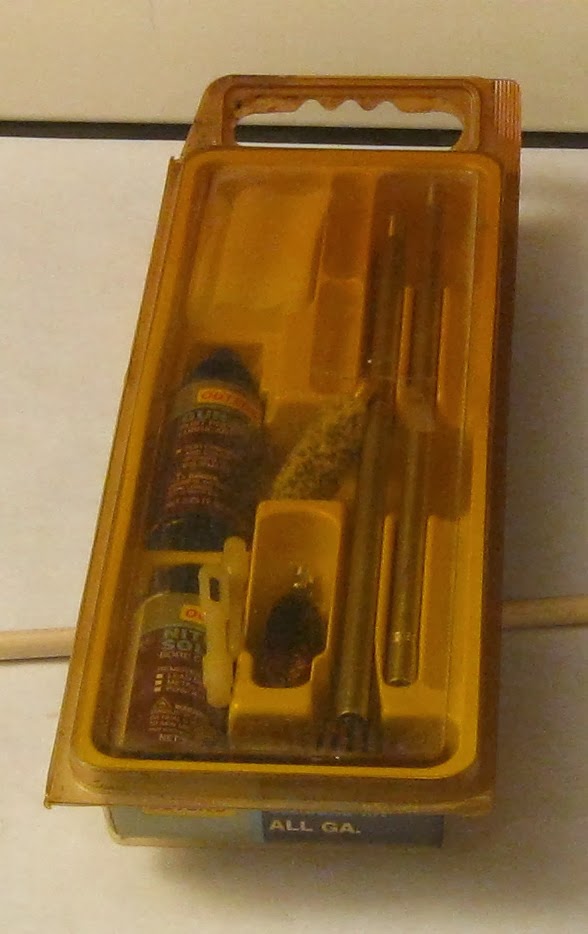 While the aluminum rod was only slightly smaller than than the dowel, the screw-on plastic tip was notably smaller.

It worked out perfectly for holding on to a swatch of paper towel. 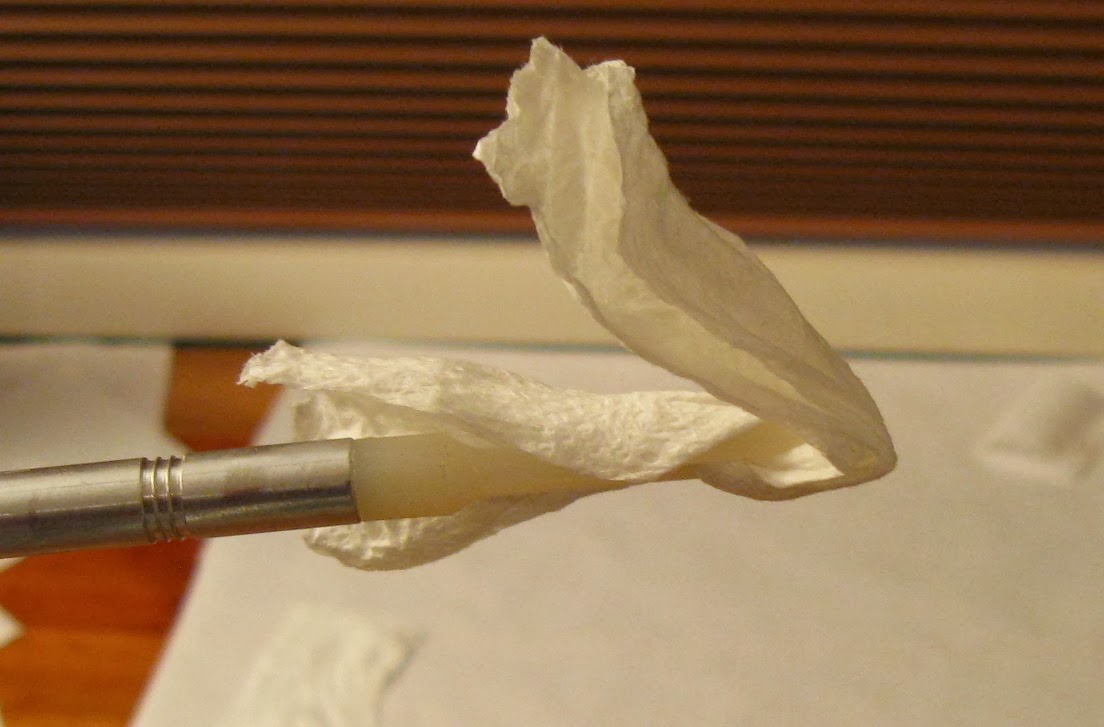 The inner bores both swabbed out clean. 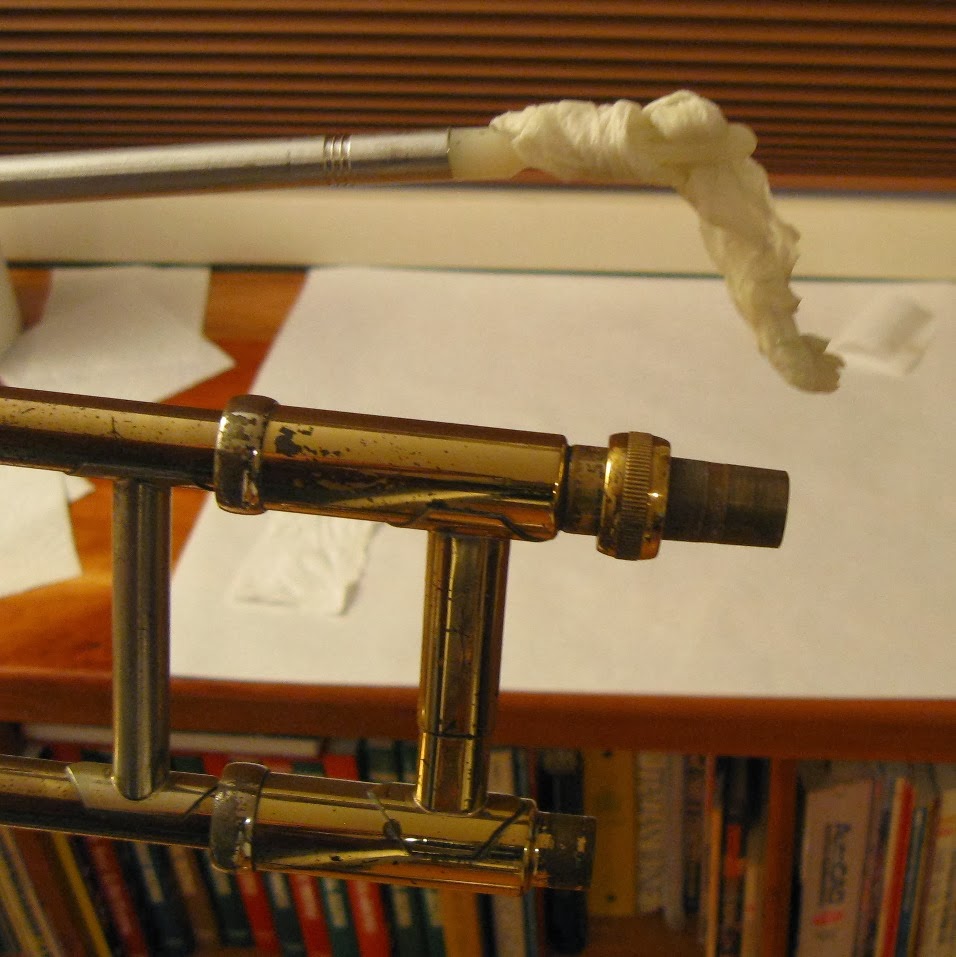 The outer bores both had a tinge of green.  Can’t say I’m surprised because the first time the ‘bone was washed, big cylindrically-shaped chucks of green/black slime washed out.  And, I was careful to not push the snake too far into the end curve. 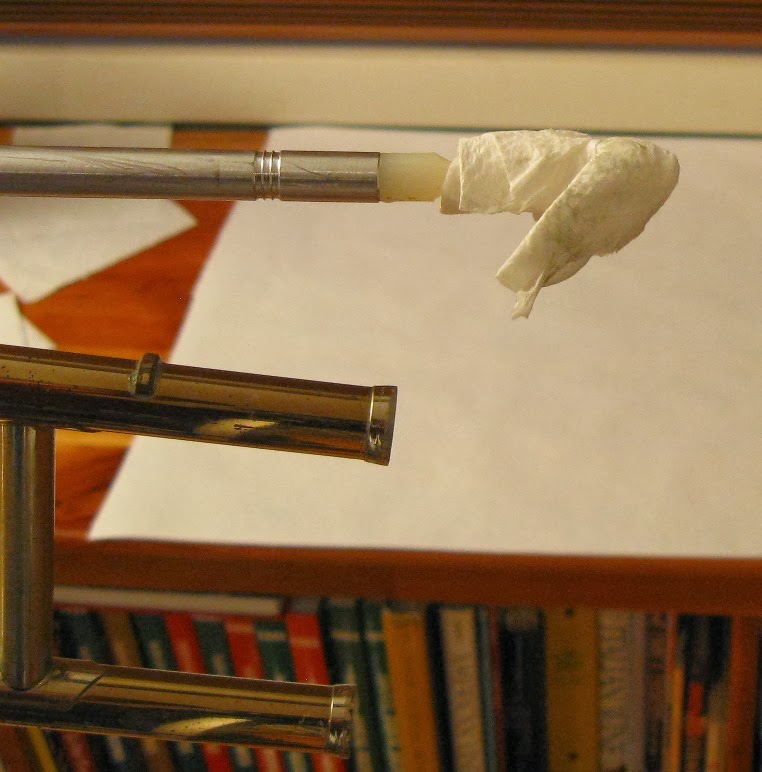 Out of curiosity, the outer slides were then swabbed with denatured alcohol to see if any additional coloring came out.  Not enough came out that I think a solvent is needed on a routine basis. 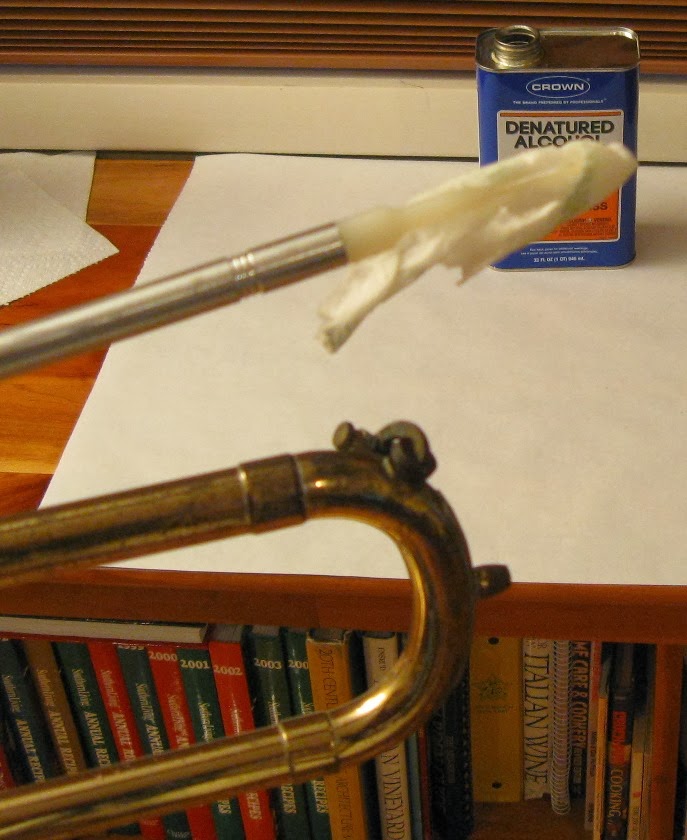 Afterwards, the slide was lubed with a fantastically small amount of Superslick, and then spritzed with water.

The jury’s still out as the whether or not the swabbing helped.  But I will most likely do it at least one more time to see if any more green comes out of the outer slide.