A month or two ago after winter was well underway, the outside temperature here in Alabama dropped into the lower teens for the first time.  Although there were scattered reports of frozen pipes & power outages we fared okay.  But a few nights later, the low temperature repeated itself, and I awoke to a cold house even though the thermostat was trying to get the furnace fired up.  So I grabbed a flashlight & nut-driver, and headed out to take a look at the house’s main gas furnace while everyone else was still asleep.

Lots of steps are involved with getting a furnace to produce heat after the thermostat signals it is needed.  In a nutshell, after enough time has elapsed since the last attempt at lighting the burners, a small fan designed to suck exhaust gas out the heat exchanger comes on.  When a pressure switch senses the fan is on, a gas valve is opened, and an ignition coil sparks to light the gas.  After another sensor verifies the burners are lit, a countdown timer for the recirculation fan is started to allow the heat exchanger to warm up a bit so that cold air is not blown out of the vents.  After a short time the recirc fan spins up & distributes the heat to the ductwork.

After removing the service access panel, I was hoping to find a pile of ashes or some other form of smoking gun.  No such luck – everything appeared to be in good order.  Then, just as I was about to get up and get my voltmeter, there was a whirring sound followed by a click and a buzz.  Moments later the recirc fan spun up.  The furnace was back in action although I had done nothing to inspire its course of action.

I hate intermittent problems.  It is much easier to find a broken part once it breaks and stays broke.

To cover all bases I checked the furnace’ User Manual and found that the furnace may not work in cold weather, and that I may need to take steps to keep my pipes from freezing.

In the meantime, though, the house warmed up, and stayed that way.  After that, other than an occasional short cycle, the furnace appeared to be working okay.

All was well until last week when Kim called me at the office to tell me the house was cold again.  I decided to cut out early and see if something would stay broke until I could get home.

This time I decided to start tugging on wires in hopes of finding a bad connection.  Bingo! – A wire easily pulled out of a factory-crimped connector on the recirc fan delay timer/contactor.  After crimping a new connector on, the furnace happily whirred, clicked, and buzzed back to life.

Sadly, the repair only lasted for about six hours after I bragged about it on Facebook.  In the middle of the next night, the furnace suddenly sounded like a clothes dryer full of tennis shoes.  The recirc squirrel cage fan’s setscrews had decided to loosen up after 16 years and let the fan bounce around inside of its enclosure. 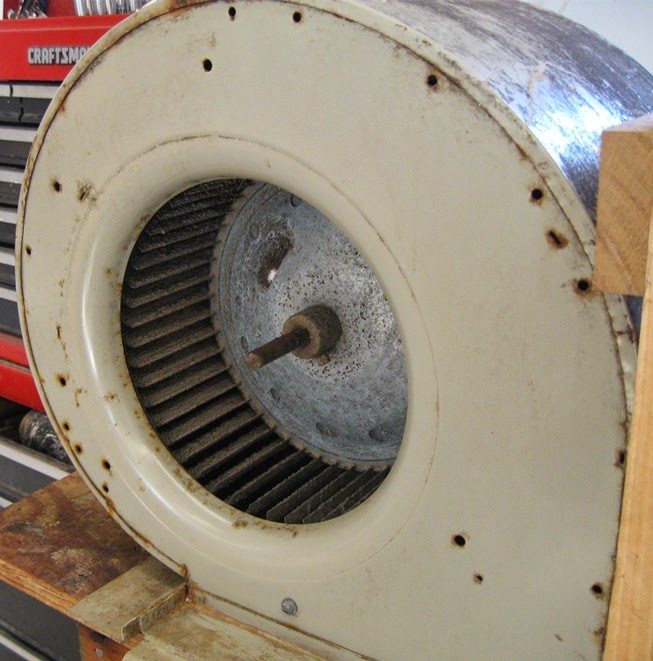 Fortunately, since the motor shaft was not chewed up, the fix appeared to be limited to re-torqueing the setscrews.

Well, that’s all that was physically needed.  Before reinstalling the assembly, the wires were hooked up, and the house thermostat was set to turn on the fan only.  No joy - there was no power in the wires.

Getting my voltmeter involved, the trail was found to end where this tale started - the recirc fan delay timer/contactor.  When I pushed just right on the newly crimped connector, the fan spun up like it was supposed to.  After verifying smooth operation, the fan assembly was reinstalled.

After popping the cover off the timer/contactor, I was about to look for a break in one of the foil traces on the printed circuit until I noticed how burned the contactor’s points were.  It was obviously time to replace the whole thing. 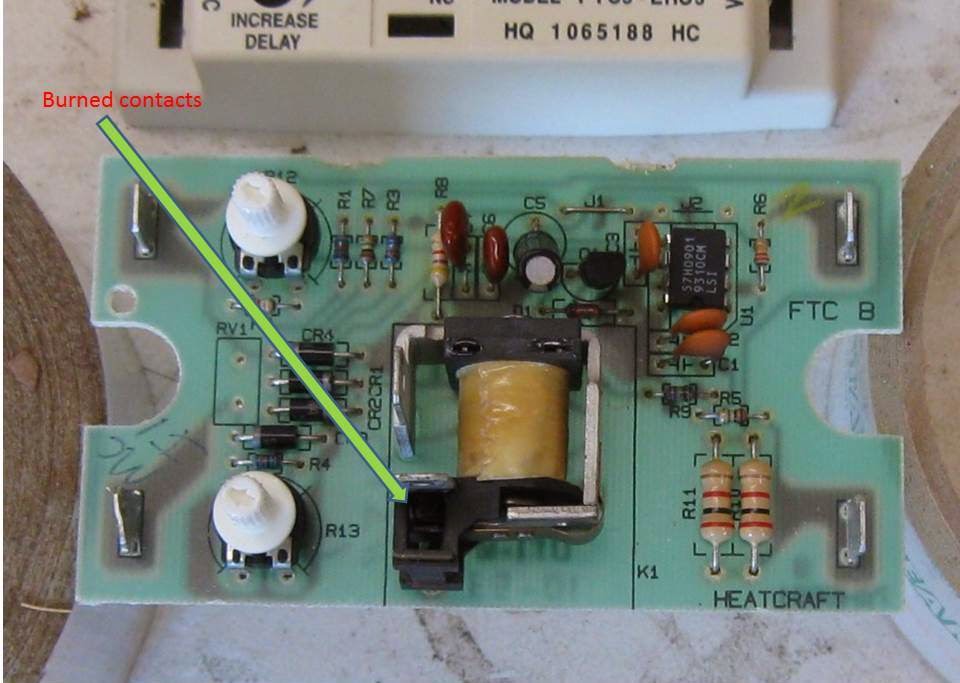 But of course, since I needed it now, no one in town had one in stock, and a new one had to come in on the train from Pixley.  Fortunately, with a little finagling, I was able to make the recirc fan spin 24-7.  This made the rest of the furnace’s sensors & circuits happy enough to provide heat when requested until the replacement part arrived.

The new part was a Factory-approved replacement for the now obsolete original part, and was not physically identical to the old one.  At first I thought some new/different connectors were going to be needed. 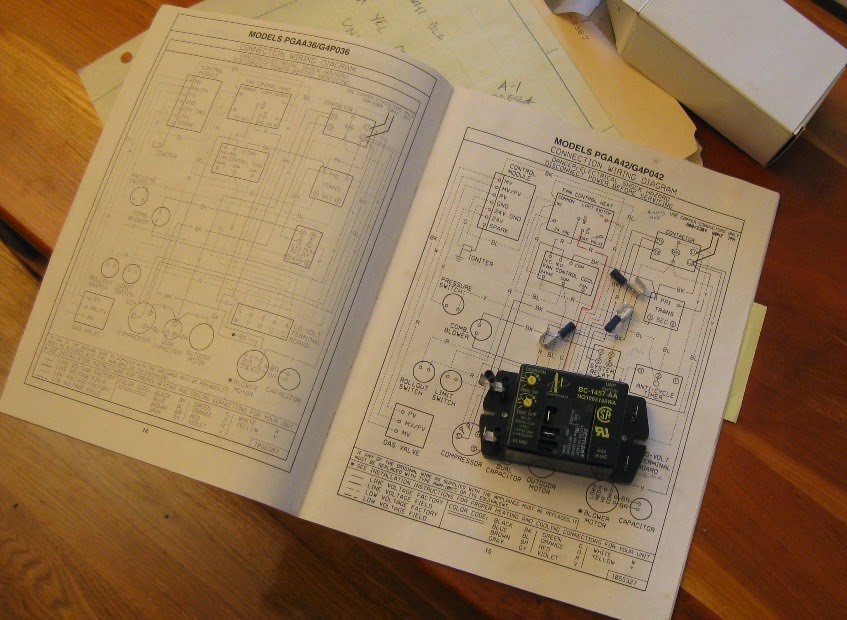 But the part ended up bolting & wiring up without incident.  The fan and furnace now work when each is supposed to regardless of me pushing or pulling on connectors.  Success has been declared since the furnace’s performance has been flawless for many days now.

In summary, there were two distinct failures, and one red herring.  The first fault was with the recirc fan delay timer/contactor.  Most likely, a tiny crack in a foil circuit trace developed, and was sensitive to temperature changes.  Crimping on the new connector, AKA the red herring, flexed the board enough to “fix” the problem for a short time.

The second fault, and one that was new to me, was the fan set screws loosening up after that many years.  But to have two disparate failures at the same time amazes me.

But my sweetie is now warm, and that makes everyone happy.