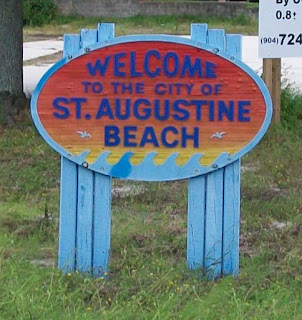 The Boyz’ fall break found us & the Airstream on the road to St. Augustine Beach Florida with the Mighty Suburban, as usual, on point.

The first leg of the two day trip there had a new twist to it because Daniel was signed up to take an on-line test at a designated time in preparation of potentially becoming a contestant on a kids-week episode of Jeopardy! Not knowing how traffic would be, Kim made reservations at campgrounds with WIFI in two different cities to ensure the best chance of connectivity.

All appeared well until the test site became available 30 minutes prior to test time. The site would not let Daniel in because it thought our NetBook’s screen resolution was inadequate. 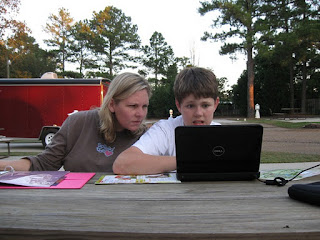 Fortunately, the campground had a guest computer in the front office which was more to Jeopardy's liking. Daniel thinks he has a shot at making the show.

This was the first long-distance trip with the Burb’s repaired air conditioning. For the first time in memory, I had to blend a little heat in on the lowest cool setting to keep everyone from getting too cold. A side benefit was the happiness kept my mind off the fact that the brakes had started pulling a little to the right under certain conditions.

We arrived safely at St. Augustine Beach, and set up camp under misty & windy weather. Deciding the beach would be no fun under the current weather conditions, we boarded a tourist trolley, and took in the sights of the oldest continuously occupied European-established city and port in the continental United States. 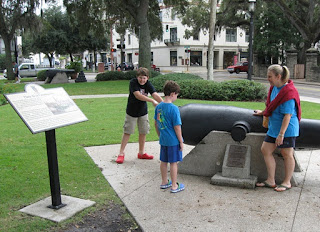 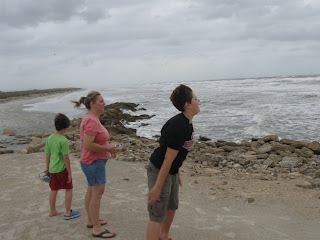 Checking under the hood the night before leaving, I was surprised to find the rear reservoir portion of the master cylinder devoid of fluid. Having neither tools nor desire to troubleshoot the issue right then, the symptom was treated with a new bottle of brake fluid. Fortunately, even 446 year-old cities cannot escape having an AutoZone.

As expected, the corrective action had no effect on the brakes. Since the issue was with the brakes “pulling”, instead of “not stopping” we left St. Augustine Beach behind us.

Arriving at our halfway-home layover campground, I noticed one of the Airstream’s two LPG cylinders had run dry. To my surprise, the campground would not refill it citing the tank’s cert-date of 05/05/04 was too long ago. It’s hard to believe we’ve been Airstreaming for eight years now. Time flies when you’re having fun.

Oddly, although I knew that gas bottles need periodic re-certification, this was the first time I could recall anyone actually checking before refilling. No worries for the trip, though because the other tank sufficed for what was left of our vacation. We arrived home the next day without incident.

The Suburban’s maintenance log indicated the last rear-axle brake work was done in 1998. Only the shoes & seals had been replaced. Not that I forgotten doing the work by any stretch – It was the first full-floating rear axle I had ever worked on. Eight bolts to get the wheel off, and another eight bolts to disconnect the half-axle shaft: all by hand. Amazingly, only one special tool is required. 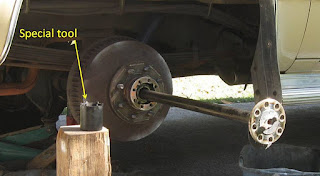 Nowadays I have a pneumatic impact wrench to help with some of the muscle work. A special tool wished for then as well as now to remove the hub/wheel drum assembly was an overhead crane – it was seriously heavy 13 years ago, and now felt 20 pounds heavier. 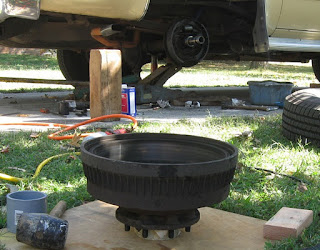 As suspected, the RH wheel cylinder was found to be visibly leaking. But I guess after 214,000 miles over 27 years it’s entitled to. The LH wheel cylinder’s leakage was still contained by the dust boot.

Brake return springs on any vehicle are tough to attach & detach. But the size spring needed for these 13” X 2-1/2” brakes adds quite the challenge to working on this truck. Although I remember the springs being especially tough to work with in ’98, I almost couldn’t extend them enough this go-around.

With a tenet of brake service being “repeat as required”, a younger person might have to perform the next iteration’s rear brake work - There’s no reason to break up a good-looking combo with a new truck.