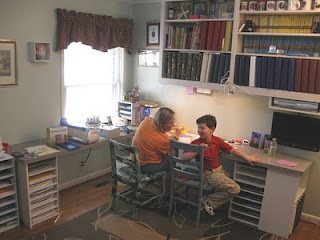 One of Kim’s enjoyments is documenting our family’s life in Creative Memory type scrapbooks, and she is quite good at it. But between that, and making flyers & stuff to support the Weatherly PTA, and helping Jared with his homework, she started getting cramped for workspace. In addition, since the folding tables being used were constantly needed for other activities, constantly setting up & tearing down was getting more irritating with each iteration. Permanent workspace, and more of it, was needed.

When she ran her idea for an L-shaped layout past me, I thought it did not work that well with the existing TV/VCR cabinet. 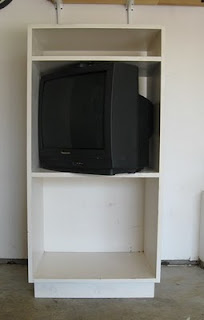 I believe she thought likewise, but may have thought the cabinet was a sacred cow to me since it came out of my shop many years ago. At the time it was built, though, it was supposed to be a prototype, and did not even get painted until a few years ago.

Kim appeared quite willing to run with my suggestion of yard-selling both the cabinet & TV, and replacing the TV with a wall-mounted flat-screen. 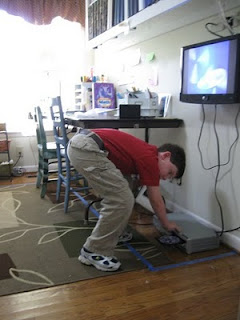 Home improvement stores usually do not sell plywood with which I am comfortable for cabinet construction. But the big orange one happened to be selling flat, ¾”, seven-ply, Peruvian plywood, which looked like grade AB to me, for a very reasonable price. 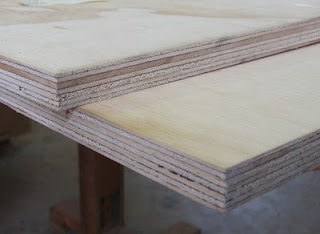 The shelves for the paper –holders at either side of the work table were planned to be ¼-inch hardboard. But neither of the home improvement stores sell it in full sheets anymore. Fortunately, a local lumber company stocked ¼-inch MDF. Although there is little difference between the two, anyone who cared would never be able to tell since the paper holders were to be painted.

The carcasses were made of 3/8” BC plywood left over from the porch project and converted to BB with wood filler. The end grain was covered with basswood strips.

The work surface itself was laminated with special-order Formica. Nowadays, Formica is thin enough to roll up for shipping. It flattens back out after being allowed to relax overnight. 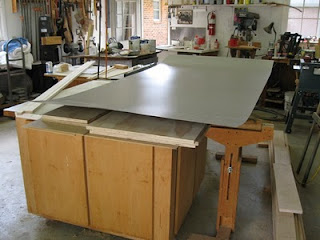 The project’s construction was split into two phases – Table, and paper-holders. Wall-mounted ledger boards support the outside of the table while a book case and sideboard support the ends. To keep from having a leg in the middle of the “L”, a ¾” piece of angle iron was screwed to the bottom to carry unintended loads. 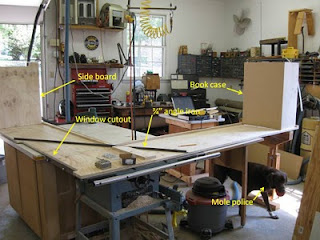 Biscuits were used primarily to keep everything aligned. 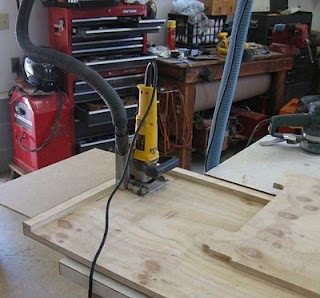 The table was then disassembled and after painting, reassembled in Kim’s room to make room for the project’s next phase. 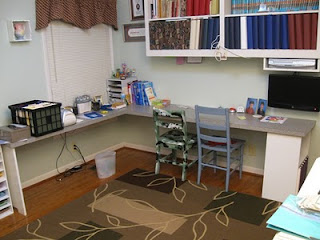 Kim already had a couple of paper-holders which were each half the height of what was needed. At one time, double-height units were available. Unfortunately, a current search turned up nothing. So I got the “fun” of priming & painting each side of the 22 boards (prime, dry, flip, prime, dry, flip, paint, dry, flip, paint) which make up the two full-height organizers with shelves spaced to Kim’s specification.

To avoid paint buildup in the shelf dados, the cuts were made after the side boards had been painted. I had never dadoed a board after painting, and was concerned about the paint scraping off at the tablesaw. Fortunately, no touchups were necessary.

While I was happy with how the project turned out, Kim was simply ecstatic about now having lotsa permanent workspace. Jared thought it was pretty neat, too. 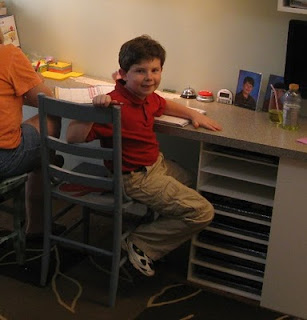 Well, that’ll about wrap it up for this edition of The New Southern Workshop. If you’d like a measured drawing…

Just kidding; no plans are available – I figure only the husbands of Kim’s scrapbooking friends would be inquiring, and I doubt they do so willingly.