Stereo Is Not Dead At My House 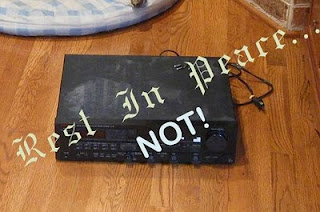 When it comes to enjoying music or movies, I am of the old “I only have two ears, and all’s I need is two really big speakers” school of thought. Dolby 7.1 is the rage nowadays, and if it had been around 20 years ago I would probably have 7 speakers & one subwoofer in my den. But for what I generally listen to, a decent stereophonic setup is fine.

I was almost forced to change my approach a few weeks when my third Luxman receiver bit the dust. None of the local big-box stores offered a replacement which only drove two speakers. While the Internet offered a small selection of suitable direct-replacements, my desire to upgrade to a tuner capable of decoding HD Radio signals reduced receiver offerings to zero. It was time to consider the individual component route.

Better sound quality & general versatility are the highlights of building a sound system piece-by-piece. But doing so is usually pricey due to what I consider a “snob cost” being added to each component by the manufacturer (real audiophiles should be willing to pay more). Fortunately, I only needed a tuner and pre-amplifier since main amplification is done by a very snobbish (back in the day) Yamaha amplifier.

Surprisingly, new HD Radio tuner prices are not that bad. That bit of cheer helped offset the fact that new pre-amp prices are still ridiculously high. Fortunately there’s eBay. I was able to win a more-than-suitable Onkyo P-3200 pre-amp for what I thought was a reasonable cost. And it worked as advertised when I got it.

After re-assembling Stereo Central with a new HD Radio tuner, and the gently-used Onkyo pre-amp, life appeared to be complete. 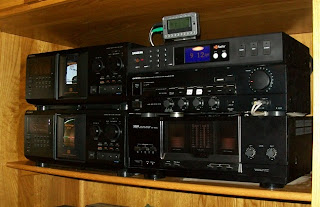 Unfortunately, my cordless headphones didn’t much care for the new setup. Since I get a lot of mileage out of headphones at night when everyone else is asleep & I want to watch TV, the headphones’ disdain was not taken lightly.

The problem was that the headphones’ base station used to be plugged into the receiver’s headphone jack, and there is no headphone jack on the new setup. I had hoped the headphones would work well on a line out jack. They did not – the signal-to-noise ratio made them unlistenable.

Remembering that computer speakers have a built-in, low power amplifier, an old set was cannibalized for the effort. 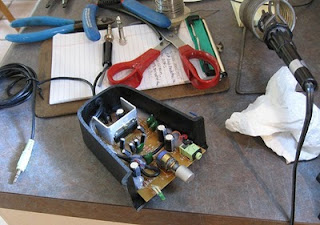 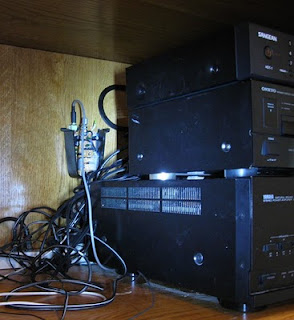 Life is now idyllic again. A big shout-out to eBay-er onekg70 for helping it happen.