Back in high school, when working on cars first appealed to me, there were two parts of a typical automobile I stayed away from – automatic transmissions, and air conditioners. The 1975 General Motors Shop Manual’s description, complete with cutaway drawings, of how the Turbo-Hydra-Matic 350 transmission found in many cars of the era functioned dumbfounded me as a 14 year-old, and I concluded the devices actually work by magic. On the flip-side, air conditioning, while easy to understand, required an expensive foundation of special-purpose tools upfront to do anything. Fortunately, the need to service either system never arose back then.

A few years after we got the Mighty 1984 Suburban, its automatic transmission started shifting strangely. Still in awe of the gear case, I let the wizards at Automatic Transmission Company Inc. wave their Elder Wands over it, and rebuild its sparkle.

Within a year or so of the transmission work, the Burb’s air conditioning compressor started making noise the radio could not cover up. After checking around & finding that Danny’s A/C Shop was highly thought of, I let him install a rebuilt compressor which worked just fine. Years later, when I added a rear-seat air conditioner to the truck, Danny was asked to tie it into the system and convert from the old R12 refrigerant to the new ozone-friendly R134a. The end result was a comfortable truck. Nothing like a new car,but I was not expecting it to be; I was happy with the re-fit.

Last year, the compressor started blowing out more oil at the shaft seal than I cared to see. Wishing to preempt a sudden loss of A/C while on a Florida camping trip, I asked Danny to install another compressor. Another rebuilt one was fine with me since the last one had lasted a more than reasonable number of years and it had not even quit. That was a mistake, and I did not even know it at the time.

At the start of the next cooling season, the air conditioner did not work. Danny subsequently decided all the refrigerant had escaped from a leaky conversion fitting he had installed. Considering it warranty work, Danny fixed it & charged me nothing. A few months later, the compressor locked up coming home from Hot Springs Arkansas. Since it had been less than a year since the initial replacement, Danny installed another compressor at no charge.

That compressor lasted less than 300 miles before locking up. The fishy part was that the A/C did not cool very well the short time it ran – Even before we lost cool air, scheduling was being discussed to take the truck back to Danny. Once again, Danny replaced the compressor at no charge. Unfortunately, the A/C’s performance after that round of work was marginal. But with cooler weather approaching, the truck did not see Danny’s shop for the rest of the year.

This year’s cooling season once again found the Suburban’s A/C worse than the previous year’s. I took it back to Danny, and outlined the marginal performance. He said he would replace the orifice tube. So, once again, Danny re-filled it for free, and once again he blamed the leak on the same fitting. I dreaded picking up the truck because of suspicions that the A/C was still going to have only marginal performance. Sadly, my suspicion was confirmed. Whether Danny did not know what the problem was, or his heart wasn’t in fixing it, I’ll never know. It was obviously time for another course of action. I stopped by an auto parts store on the way home to buy R134a gauge adapters to allow an old, R12 gauge set I had picked up years ago, but never used, to connect up to the truck.

Many days of reading about automotive air conditioning ensued to both get up to speed on the subject, and decide whether I wanted to repair the A/C myself or find someone who could troubleshoot a 26 year-old truck which was not cooling with the refrigerant with which it was originally designed. Between reading about what the repair was probably going to cost, and finding no potentially trustworthy repair places, a nice Mastercool vacuum pump was purchased to signal to …well, me… that I was going to fix the Mighty Suburban’s A/C myself.

Blending my new-found knowledge with the truck’s symptoms, I posted a general question on an automotive air conditioner forum wherein I wondered if too much oil in the A/C system could be a cause of the truck’s lack of cool. I was immediately beat up by the resident talent for not posting pressures, actual temperatures, etc. Although they’re right to badger about me for not including important information, I sure do hate being a newbie on Internet forums.

So, I whipped out my 16 year-old “new” gauge set, R134a adapters, and proceeded to gather data for my second post. Unfortunately, the post ended up being about my high-side gauge hose blowing apart at only 320 psig and shooting oil & refrigerant all over the place. 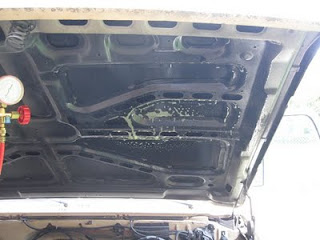 The forums’ response was for me to purchase a decent set of gauges. But one guy did provide a link to a good set which I did order. The gurus uniformly agreed that the only way to figure out what ailed the system was to tear it down & note the amount of oil & refrigerant present while keeping an eye out for trouble.

The next hurdle was to recover the remaining refrigerant. Professional shops use recovery carts which can cost many hundreds of dollars. While some people just vent the system’s refrigerant to the great outdoors, that’s not ecologically friendly. I’m not a tree-hugger but I am a tightwad – The Suburban holds at least $60 worth of R134a which I wanted to recover as cheaply as possible.

My solution was to vacuum all the air out of an old 15 lb refrigerant container a friend gave me, connect it to the Suburban via the un-ruptured parts of the gauge set, and stick the recovery vessel in a quilt-covered bucket of ice. The cold environment kept the tank pressure lower the Burb’s A/C system, and the liquid refrigerant distilled out of the truck. 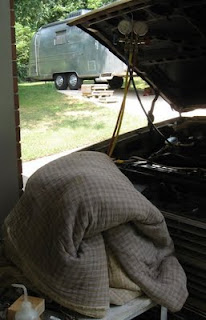 Knowing that the recovery process would be slow, I went off and cut the grass. A couple of hours later, the tank was 68.2 ounces heavier, and the low-side pressure gauge told me there was no liquid refrigerant left in the truck.

Modern-day vehicles have a sticker under the hood which lists the amount of oil & refrigerant the correctly operating system requires. The Burb has no such sticker, and Internet charts start with Suburbans two years newer than mine. Fortunately, the guys at the A/C forum were able to tell me my vehicle is supposed to have 10 ounces of oil.

During the teardown, 16 ounces of oil was recovered. 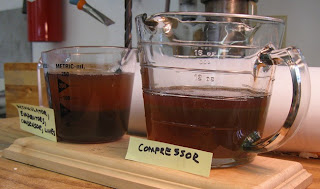 Between the hose blowout, and what I could not catch during the teardown, I figure the system had at least twice the amount of refrigerant oil it needed.

The oil in the original R12 system was mineral-based, and is not compatible with an R134a system. Modern-day systems use a glycol-based lubricant. The old mineral oil is supposed to be removed during conversion from one refrigerant to another. If you look closely at the smaller cup, you’ll notice the fluid has separated. I’m pretty sure that’s mineral oil on the top and R134a-compatible lubricant on the bottom.

It appears my trust in Danny was misplaced. The expansion tube in the system looked like it had accumulated debris from two locked up compressors. 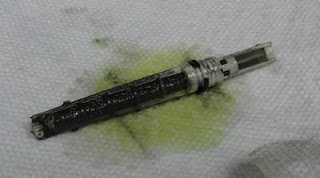 While the accumulator’s ostensible purpose is to accumulate refrigerant & oil, it also filters the oil & removes trace amounts of water from it. Although welded together during manufacture, Mr. SawzAll helped me get a peek inside. 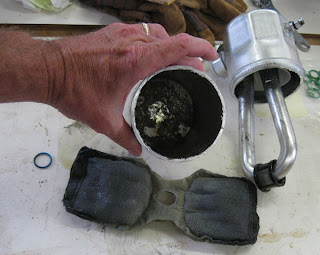 It too looks like it has seen the debris generated from bad compressors. Fortunately, all the refrigerant lines flushed out clean, so it looks like the latest compressor is okay.

Waiting for the new manifold gauge set to arrive gave me time to draw conclusions on what I had seen. It all started with the compressor. The very first one Danny installed was remanufactured by APCO, and from my homework prior to installing the rear A/C I knew it to be a top-notch brand. What I did not pick up on at the time I asked Danny to replace it was that he had switched suppliers, and the subsequent compressors he installed literally had no names to be found.

The Internet is full of tales of people going through several rebuilt compressors before finding one that works for any period of time. My latest one appears to be hanging with me, and as evidenced by the blown gauge hose, is still able to produce good pressure. I decided to stick with it for now.

A new accumulator, orifice tube, O-rings, and the prescribed amount & type of R134a refrigerant oil (PAG 150) were installed, and the system leak-checked before the new gauge set arrived. 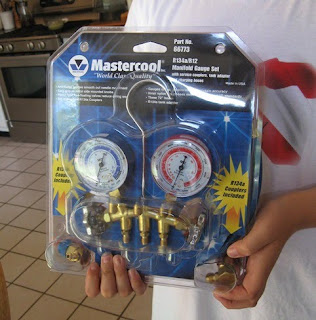 I was incredibly impressed with what I saw in comparison to the last set of gauges. Although the manifold appears similar in appearance to the other set, the hoses/fittings appear to be of a quality head-and-shoulders above what blew out before. Mastercool's hose description certainly reads better than the lack of description the last set had. If nothing else, the new hoses had a better "feel" to them (as in not potentially blowing apart later). It was also nice to have gauges with R134a markings.

There are no hard & fast charts on the proper load of R134a in a formerly R12 system – only guidelines based on the original amount of R12. One super-sharp forum member suggested starting at 90%, and monitoring the evaporator’s inlet & outlet temperatures to tweak the final refrigerant load. So thermocouples were zip-tied in place underneath the putty sealing where the lines entered/exited the housing. A third thermocouple was stuck in the dash center vent. 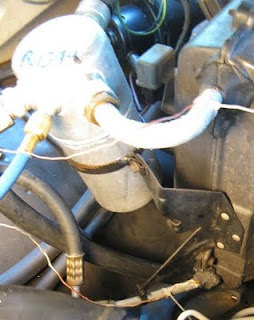 Frustratingly, the approach did not work. After awhile, the evaporator inlet temp got warmer than the outlet temperature. Apparently, the heat from the 325 psig high-side line was wicking past the orifice tube and affecting the reading. Short of disassembling the evaporator housing, there was nothing that could be done to get the probe out of this heat’s way. I was forced to give up on measuring differential temperature as a means of determining the proper refrigerant charge. So recharging was stopped at 90% of the R12 spec (75-7/8 ounces of R134a).

But that was enough – the vent temperature was markedly cooler than it was before this effort began. Although the gauges read like the retrofitted system was doing all it could do, since I’m both new at this, and never thought to check a vent temp the last time the A/C was operating nominally, I’ve had to rely on my “calibrated” hand for reference, and it’s not very quantitative. But the hand seemed to think it was pretty cool.

The pressures, temps, ambient weather, moon phase, etc. were posted on the forum and, to my relief, one of the gurus allowed that “… It looks pretty much in line with the expected results of a conversion on a big system like that...” There’s nothing like the voice of experience.

The truck’s been driven around & to work once, and I’m happy with the way it is now cooling. Of course the best test will be our next camping trip, but I have high confidence that my wife will be reaching for her binky.