When my wife & I married in '94, we both already had established spice cabinets to combine. One of her spice cabinet's bottles contained whole Allspice, an ingredient not common to anything I cooked with up to that point. So it got added to "our" spice cabinet to languish until needed. 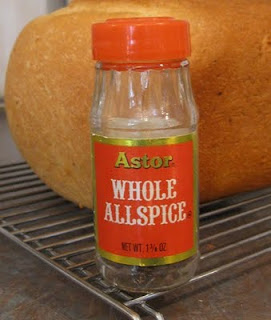 Recently, I was making a new-to-my-discriminating-family dish, and a had a fond memory of a Kim-predecessor making a similar meal for me at her place which included whole allspice during the cooking process.

Worried that the family might not react favorably to a strong flavor of allspice, Astor's Whole Allspice was fished out of the cabinet to add whatever contribution it could after probably more than 17 years.

Its contribution was surprisingly stronger than anticipated. Fortunately, no one appeared to consider it overpowering, and the meal was enjoyed by everyone.

So I now know pork with whole allspice can be rotated in every so often & be eaten by everyone. When Kim's dowry runs out, I will be curious to see if new, whole allspice will be that much different from what Astor sold many years ago.