Construction of a replacement, five-foot long, Yellawood picnic table was completed this past weekend just in time to be load tested by everyone from Daniel’s Webelo Scout pack who came over to work on this year’s Pack 359 Cubmobile. 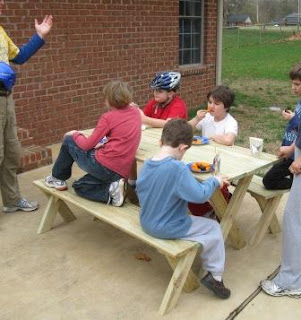 The new table & benches replaced ones I built over 20 years ago for my first house. But between age, having its corners chewed off by three separate dogs, and acting as my saw horse in the early years, everything had started looking pretty rough. 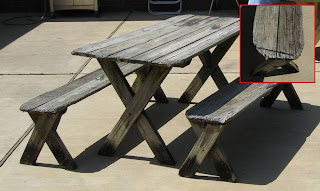 But the general size of the original table and its unattached benches was great in that it could be easily moved when necessary. So, other than a few minor modifications, the new table is basically a clone of the old one. And the old one was a clone of the outdoor furniture my brother & sister & I grew up picnicking at. Why reinvent the wheel?

The old table & benches had been built with nothing but a circular saw and drill because that’s all I had. Now that my shop is stocked with stationary woodworking equipment, I was able to easily construct an improvement to the bench legs’ diagonal cross-members.

The original cross-members were simple lengths of 2X2 lumber. Although structurally suitable for the load at hand, the 2X2’s footprint across the two bench boards was not really wide enough to keep the wood screws from loosening due to bench flex. My improvement, as seen in the RH picture below, was to taper cut a 2X4 down to 2X2 at the board’s end. The increased contact area should keep the screws tight over a longer period of time. Although the Boyz acted thrilled by the modification, I think they were just happy to have somewhere stable to sit. 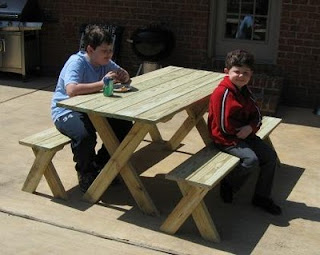 If I had been thinking ahead, I should have had the Scouts build the table & benches for me – Led by Scoutmaster Matt, they did a great job on the Cubmobile. 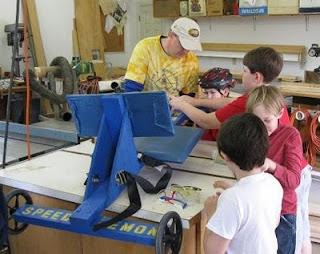 Pack 359 is sure to win the Nationals this year.