Before 1970 or so, redwood used to be so common that houses were even framed with it. While I don’t know how much redwood our house (built in 1969) has in the walls, it did, for aesthetics, have exposed redwood ceiling beams in the den when we bought the place around 1995. Deciding we did not like the general look, the non-structural beams were removed and stored for a use to be determined later.

A couple of years ago, during a visit to my folks’ house, my mom lamented that two of her cast iron & painted wood garden benches were getting unsafe to sit on, and asked me to take a look. One of the benches was immediately recognized as one I had replaced all the wood slats on around a decade earlier. Sadly, I thought the white oak used for the effort would have lasted longer. But it didn’t, so both benches were loaded up, and we headed back home.

On the way home, it dawned on me that benches’ rebuilding would be a great use of some of the old redwood beams squirreled away in the garage. The next weekend, after an hour or two of ripping and planing, enough wood was sized to rebuild three garden benches. 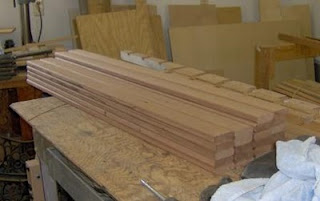 Although seeing the wood’s grain is my preference, my mom is keen on a certain shade of green. Unfortunately, I really just don’t like to paint. But, there are some things you will do for your mom that you would not necessarily do for anyone else. Between that, and the better look achieved by painting the slats before installation, I sucked it up, and whipped out the paint brush. Prime, let dry, flip, and then prime that side. Paint, let dry, flip, and then paint that side. Repeat the paint part. It took what seemed forever. 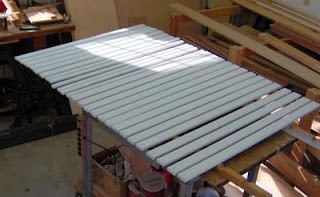 But, the final product turned out quite well if I do say so myself. 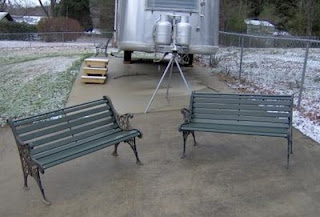 Mother was, of course, thrilled to get ‘new’ benches. All was now well.

Earlier in this epistle I mentioned wood had been cut for three benches. The plan, at the time, had been to re-slat an old bench of mine at the same time as Mother’s. 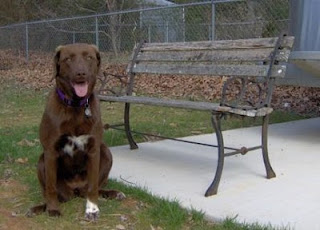 But if you look closely at the dog’s tongue in the picture above, you will notice small flecks of brown which are amazingly similar in color to the chewed-off ends of my garden bench. It appeared to best to wait a while before rebuilding my garden bench to give 1-year-old Cookie time to grow out of her idle destruction phase.

Now, jump ahead to last week. I finally lined up a man to come blow insulation into my Shop’s attic, and he showed up Friday to do the Shop, and bring the house’s insulation up to the current City Code requirement for blown fiberglass of 15”. As the current temperature was in the twenties, I of course had to turn on the seldom used Shop heat after he left to see it actually cycle now that my Shop was completely insulated for the first time in 11 years.

The difference was impressive, and Saturday morning was spent in short sleeves cleaning up the place while watching the double element wall heater cycle on & off. While putting some stuff away, I noticed the redwood slats stored neatly out of harm’s way atop the wood crib. Between deciding Cookie had quit teething, and needing space to stage 60 bd-ft of basswood for a cabinet door project, now seemed like a good time to finish my garden bench.

In spite of painting’s low level of appeal to me, the bench slat’s master plan had always called for three coats of spar urethane. But the ole “paint-dry-flip” method of surface coating had to go. My solution was, what I will call, the Rotisserie Method. 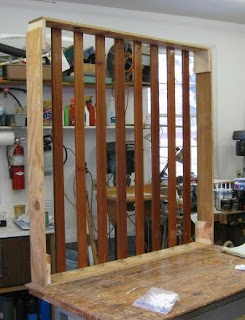 The slats are supported each end by drywall screws. Notice I said “supported” – There was no reason to tighten the screws enough to dig in appreciably. Using this method, the slat could be turned as it was polyed thereby coating all six sides of the slat in just minutes. After curing, each slat could be individually removed for scuff sanding between coats. I was very pleased with both the results, and the amount of time saved by the simple jig. 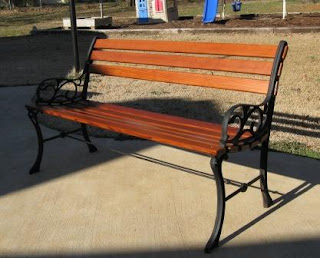 The Boyz thought the ‘new’ bench sat as nicely as it looked. 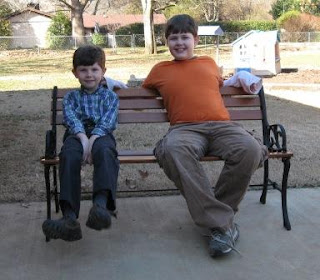 Now that there is heat in the Shop and no more brown flecks on Cookie’s tongue, it’s time to replace the picnic table I built 21 years ago for my first house. 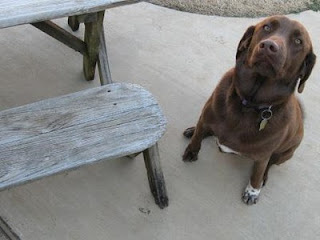