Every convenience brings its own inconveniences along with it
- Proverb

By my own choosing, much of my life is consumed with doing things the hard way. In addition to lighting pilot lights in my vintage travel trailer and winding clocks at home, I prefer to make my own Cream-of-[fill in the blank] sauces and yeast bread. So one would think that pulling a cord or twisting a wand to open or close a window shade would be right up my alley. But the push-button convenience of the motorized shade over Big Tub has spoiled me – Push UP, and the shade goes up. Push DOWN and no more neighbors’ yard lights. Cool.

Although I tried to resist, this Siren Song of convenience proved so strong that a similar shade was just installed in “Tom’s room” on a ridiculously easy-to-get-to window. 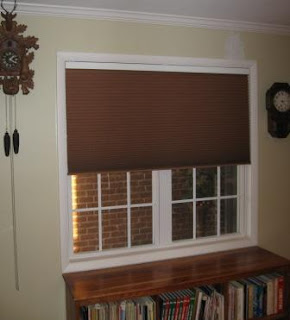 Heeding the song was not without consequences, though. While I escaped with my life, the sheetrock above the window suffered greatly while I tried repeatedly to drill an 18-inch long hole through the 40 year-old header behind it. 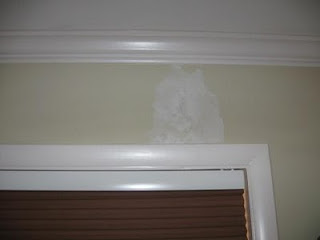 The first hole was drilling great until the bit encountered a nail. After sharpening the bit, the second hole was going well until the sheetrock started to bulge. Hole number three appeared to be the ticket right up to the point of when the ¾” diameter drill bit poked all the way through the sheetrock. Sixteen inches of hole number four were drilled before my Milwaukee ½-inch drive drill motor all but stopped drilling, and started to smoke. Old wood can be a real drag to drill.

After letting the drill bit and motor cool, the drill bit was waxed with Johnson’s paste wax to cut down on the drag. Success – The new shade now had wiring access to the attic.

Cutting the hole for the new switch and wiring everything went smoothly. Watching the shade go down the first time the button was pushed put a smile on my face…until the shade got to the bottom of the window & stopped uneven with the window sill. If the shade had had a cord on it, I would have just adjusted it for evenness. But with no cord, I ended up having to pull the motor out and re-clock one of the “winder-uppers” on the motor shaft. All is now well.

From now on, I’ll stick with doing things the hard way – It’s easier!