Windows 95 has left the building

.
…along with my first real PC – A full-tower, Micron computer with a cat’s-meow-for-its-day, 90 MHz Pentium processor. Its 1.3 gig hard disk decided to throw in the towel this past weekend after 14 years of continuous operation, the last ten of which were spent in my unheated shop running a train-whistle-on-the-quarter-hour program. 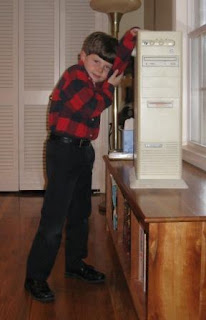 But I knew this day would eventually come, and had prepared for it by having not one, but two old Windows 98 computers sitting in the unheated garage waiting to fill the void. The first choice of the two for restoring the sound of live steam to the shop was a computer custom built for me at the local Gigaparts store in 2000 to replace the Micron as “house computer”. But since it was missing its hard drive, Dad’s old Acer computer got carried into “Tom’s Room” for prep.

Old Acers apparently do not like sitting around in an unheated garage as the computer did no more than beep a lot before shutting itself off. Hoping the Gigaparts PC would fare better, I rummaged around my toy box, and found a hard disk that looked like it would work. Years ago, I used to keep up with the difference between IDE, EIDE, etc. but everything kept changing so fast that the fun got sucked out of it, and I stopped. Fortunately, Google makes it really easy to research topics quickly.

Thankfully, both computer & hard disk whirred to action without beeping. But the hard disk had Windows XP on it, and XP didn’t seem to care much for the Windows 98 box it was now in. A couple of hours were spent trying to get computer & hard drive to play together before deciding it was not worth the effort. The Windows 98 operating system would have to be installed on the computer.

Windows 98 was the last Microsoft OS which used a floppy drive for the initial part of the install, and the floppy drive on the Gigaparts computer was found to have something stuck in it. Between idle curiosity, and remembering the computer had spent time in my then-six-year-old son’s room before its retirement, exploratory surgery was performed on the drive. Now we finally know what happened to Daniel’s library card, Toys-R-Us birthday club card, and penny. 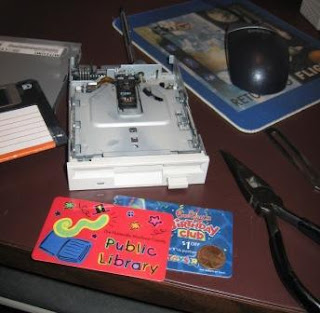 But after getting everything ready for a floppy disk, the right floppy disk could not be found. It appeared the project was dead until another copy of the magic floppy could be located.

Then, it dawned on me to see if the entire Acer computer, hard disk and all, was dead. So, after dual hard disk ectomies, the Gigagparts PC was powered up with the Acer’s hard disk. Success! It wasn’t pretty at first, but it worked. 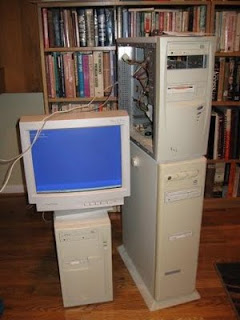 If the computer could have talked at that point, it probably would have said, “Whoa! I’ve got to cut back on the mushrooms. It feels like my head’s on a different body”. But after feeding the computer a few sobering disks of device drivers, I was finally rewarded with another icon of Microsoft’s past. 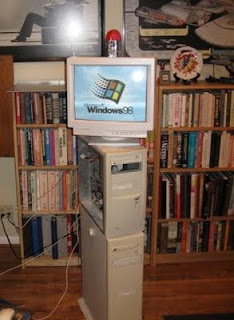 Now that I had working Windows 98 box, a magic floppy was immediately made should I ever need to install Windows 98 from scratch. 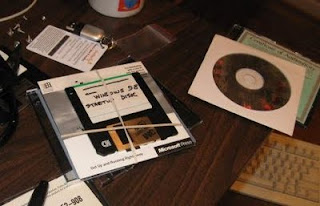 Since this PC will not be hooked to the Internet while in the shop, there’s no worry about computer viruses & such. But for nothing more than hoot value, I decided to check for Windows updates while it was still in the house. In spite of a message advising me that Microsoft stopped supporting this operating system on July 11, 2006, there were six critical updates ready for download.

After installing the updates, and verifying through headphones that the train whistle program still worked okay, the computer was considered ready for shop duty. 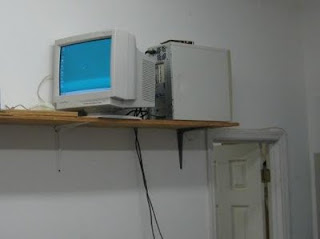 The computer sits on a shelf in the boat bay where there is a lot less dust. The speakers, one from a 1957 Heathkit Radio, and one from the Micron’s early days, are in the main shop. 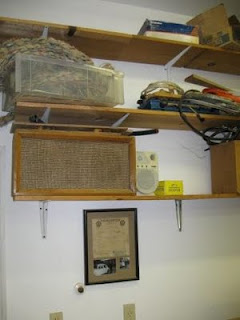 After hooking everything up, and standing around drinking beer for 14 minutes, I was rewarded with the first train whistle produced by the Gigaparts computer, and it was so soft I had trouble hearing it. It then dawned on me that this computer had always been used with an Audigy Sound Blaster card instead of the onboard sound port. The trouble was that the card formerly used is now installed in the current House Computer.

Luckily, I had a second dawning where I remembered the Micron came with a forerunner of the same card. After a successful transplant, and at least 14 more minutes of Natural Lite, a single blast from the 604 loudly announced quarter-past the hour.

And so ends the Micron era. But I do have the monitor, keyboard, and mouse to remember it by *sniff*. The Acer ought to join it by the side of the road, but it still has a few usable parts remaining.

The Gigaparts PC should have years of life left in it. Hopefully, by the time it quits, the house’s computers will have been rotated, and Daniel’s current computer will be sitting in the garage waiting to take its place. But to preclude premature rotation, I don’t think I will let Daniel in on the plan…