This is the first post of the blog I created several weeks ago, and although I knew there would be a learning curve, I didn't expect as much trouble as I have had coming up with a good first post.


You see, for about the past five years, most of my free computer time has been consumed with Airstream-related stuff because 'streamin' is one of my favorite activities. Some people reading this might even know I have a webpage devoted to my 1967 Overlander International. But, since most, if not all, Vintage Airstreamers are Do-It-Yourselfers AND I just want to share my experiences with whatever pops up in my curious world, I decided to use this blog to chronicle both Airstream stuff NOT covered on my webpage, and DIY stuff that's either cool or I just wanted to do myself rather than pay someone to do.


Although I plan to document some back-projects, two significant things happened lately which I feel like sharing. 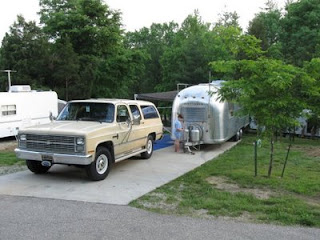 Holiday World is home to the world's tallest water ride which Number 1 son & I rode. 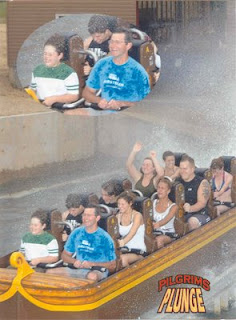 We had a blast at the park. There's a little more fun to talk about concerning our trip, but my buddy Frank wanted to hear more about the stump removal I just had done. Since I'm still learning how to work a blog, let me move over to what he's waiting for.


The month of May established a new record for rainfall here in Northern Alabama. In addition to flooding my house's crawlspace & wiping out my air conditioner's ductwork (future post), the rain & wind took out a cement-filled, double-barreled Hackberry tree sitting at the fence line in my back yard. Seven chainsaw chains later, I was left with this: 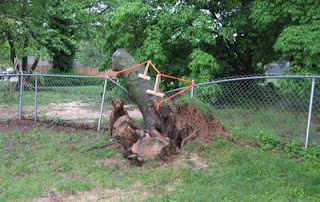 The orange tape is there to keep Cookie from walking over the trunk into the neighborhood (yes it worked - Labs are great dogs but they ain't rocket scientists).

I though about renting a backhoe, but since I last operated one around 1979, I thought I might be a bit rusty. So I called Buck, who, a few years ago, had brought in dirt & distributed it with HIS backhoe around my newly-built shop and asked him to handle it. He brought in his new toy, a miniature trench hoe, to do the job.

A skillful fellow, he did a fantastic job, and I was later grateful that he brought a tracked tool in for the task because a backhoe would have really rutted the yard.

Hopefully, my future posts will be better as I learn how to post to a blog (adding pictures is more trouble than I was expecting). But I'm getting great training from reading everyone elses blogs. Marcus has a good idea - Let's see if it works for me: 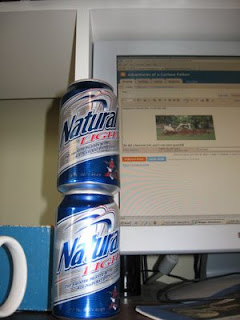 Naa, I think I'll leave the tour to the Texas beer.