1st Use of Emergency Generator

Last year, I decided to get a small generator capable of powering the Airstream in emergency situations. The project snow-balled, and I ended up with two generators & the capability of powering part of the house.

Last night around 7:00, the lights went out. While not an uncommon occurrence, outages are usually preceded either by the line fuse at our utility pole blowing with a big BANG, or the lights dimming upto three times before going out for good. None of the above. Our neighboorhood went dark & stayed dark. Figuring that a TVA feed to the entire city had gone kaput, I told Kim that it was probably going to be dark for a while. Since Number 2 son appeared to be uneasy in the darkness, I decided to wheel out the big, loud generator to power the house TV and see if, at 5kW, it was strong enough to start a big air conditioner (highly doubtful). 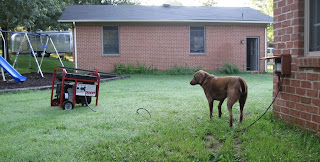 Cookie says, "Turn that thing down!"
The generator fired right up, and did a fine job of running the TV & cable-box in our room, and the computer & cable modem in "my" room. The AC, however, just grunted as if to say, "Pay attention, boy! My compressor needs a 240 vac, 30-amp service. While you've got the voltage covered, that wimpy generator of yours can't cough up much more than 20 amps. Now, watch this..." The generator's circuit breaker then popped.
Fine; I didn't want his old cold air anyway.

This particular generator is strong enough to start the Airstream's air conditioner should the need arise. It was wired to the mean old house AC to run the natural-gas furnace's blower in a winter emergency. That it can do.

The power ended up being off half the night, and I got close to moving the generator over to the Airstream just to have some AC. But the Generac generator is LOUD. Since I'm sure my neighbors probably noticed that too, the Generac was switched off around 11:00.

Right now, my quiet, 120 vac Honda generator will not connect to the Generac's transfer switch, so it can not be used easily to power the house TV. But I'm sure everyone's ears will appreciate it when I remedy that problem later today.
Posted by TomW at 7:14 AM