Off with his head

Many people may not realize (or particularly care) that most of my 1967 Airstream's functionality is being realized with the originally-installed parts/appliances. In spite of being 42 years old, the refrigerator, cooktop, oven, furnace, and water heater are still giving great service. So was my shore power cord's plug.

I never visited a campground before the late eighties, so I don't know what campsite power panels used to look like in the sixties. But the sites' electrical hookups must have been different than everything we have visited in the last five years with my Overlander as my shore power plug has been plugged uncomfortably in to each & every site on our travelog.

The problem is that current camp site electrical hookup code appears to require that the electrical box door close substantially over the plug. This nuance can only be achieved if the power plug is mounted 90 degrees off the the cable. Airstream, in the sixties, had the plug coming straight off the end of the cable.

The 30-amp electrical outlets in several sites we have visited were worn out, and I had to duct-tape my shore power cable in position to get good electrical contact. Deciding that the strain on the cable leading to the plug was destined to give me a problem when I least wanted it, a new, 90-degree plug was acquired, and my Overlander's original molded-on plug, in perfect working condition, was chopped off to receive it. 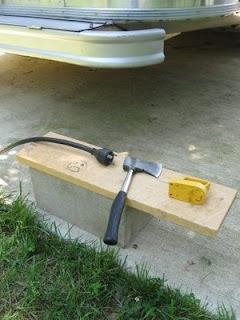 On a happier note, I found time to build an adapter which allows my quiet Honda generator to interface with the House's transfer switch. Cookie was much happier with the setup. 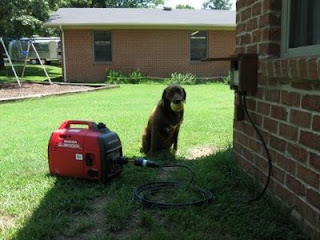