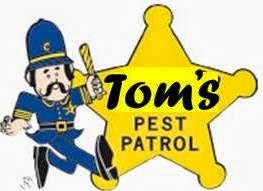 For a variety of reasons, I do my own home pest control.  Usually, all this entails is spraying the kitchen baseboards at the beginning of summer with ant killer, and crawling around under the house every year or so with a garden hose hooked to an insecticide sprayer dispensing joy to all the stuff I’d rather not have living under there.

This summer was different. While moving something around out in my Shop, I found evidence of a dormant termite path.  It surprised me because I had had the ground under the monolithic slab treated with phenomenal amount of termiticide before the concrete was poured, and there is a termite shield bridging the gap between the foundation block & veneer brick.  Since I was not there the morning the brick layers started laying the Shop’s veneer brick, I must assume there is a disconnect somewhere with the termite shield.

Long ago, just before we purchased our house, we were told the garage had once been treated for termites but all was well now.  Out of curiosity, I followed up on termite treatment methods, and found the most effective method of preventing/treating termites is drilling through the veneer brick’s mortar, and injecting the space between the brick and foundation block with a prescribed amount of termiticide.  Although our house had this treatment, neither the addition we added later nor the detached Shop had.  It was clearly time to do it.

Due to the sheer volume of termiticide that was going to be required, a 35 gallon mix tank was purchased from Tractor Supply to dilute the many gallons of concentrate needed for the effort.  Since it needed to be portable, but was too big to fit in the wheel barrow, the wheel barrow was modified. 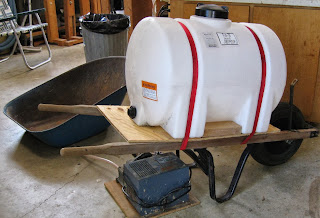 But on a wet run with the tank filled with just water, the ~280 pounds was found to be too much weight to safely push around.  Fortunately, since there’s been no rain lately my truck was able to stand in for the effort.

While the Internet listed many suppliers of store-bought termiticide injectors, everyone wanted a surprising amount of money for the simple device.  It is times like these I am happy for my coffee cans full of spare parts. 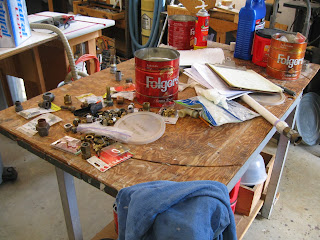 After a couple of setbacks, the Termiticide Station was finally ready for prime time.  The delivery pump for this effort is the original PAR water pump out of my ’67 Airstream.  While it works okay, because it leaks it was mounted over a drip pan.  The pump runs off of 12 VDC.  If I had had a spare trailer electrical plug lying around, the pump could have been easily powered off of the Silverado.  But since I didn’t, the Airstream’s original Univolt, hooked to an extension cord, was used instead. 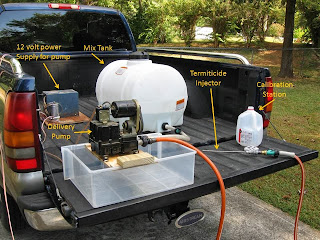 To access the areas of interest a ¼” hole was drilled every two to three feet with a masonry bit attached to a hammer drill.  In my case this worked out to every fourth brick. 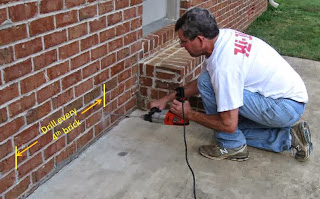 While the main house already had the holes, many of them were now found to be plugged with mud dauber nests.  Fortunately, it was easy enough to poke the holes open with a metal rod.

During the wet run, the pump’s flow rate was determined with a kitchen timer and a one-gallon milk jug.  So, after the holes were drilled, each opening was injected with a timed amount of termiticide which corresponded to quantity guidelines established by the Ag department of the University of Nebraska. 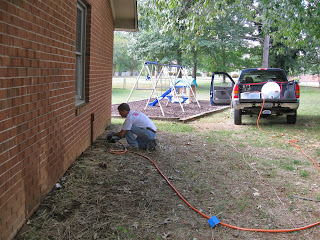 The effort finished up early enough in the day that Kim did not mind reminding me about how many cockroaches she had noticed lately scurrying for cover every time she turned the lights on at night in the garage where she parks.  Cave crickets appeared to be making a comeback, too.  She thought the roaches were living in the woodpile, and I figured the crickets were hiding out under the water heaters where they did last time. 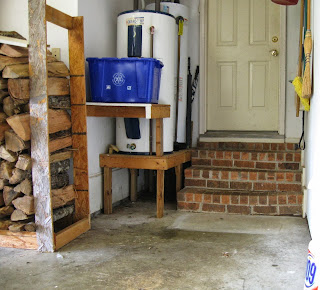 So everything within reason was pulled away from the walls so that the perimeter could be swept & sprayed.  For this effort, I used the same stuff I use under the house.  A respirator has to be used due to the chemical’s choking odor. 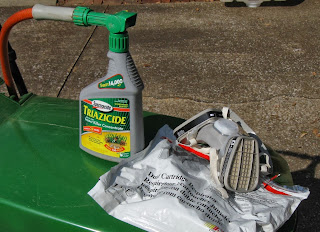 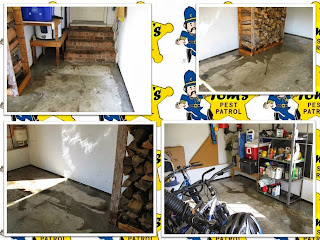 That evening, I went out to the garage and found at least 20 dead or twitching cockroaches spread out across the entire floor.  The carnage was swept up the next morning after the floor dried, and Kim had a chance to see the bugocide.

Like the Christmas decorations that get pulled out once a year, the mix tank & injector now quietly wait on a shelf in the garage for their next use. 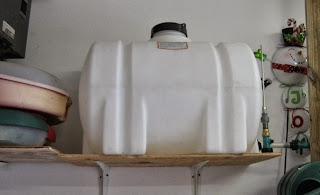 Hopefully, it will not be anytime soon.