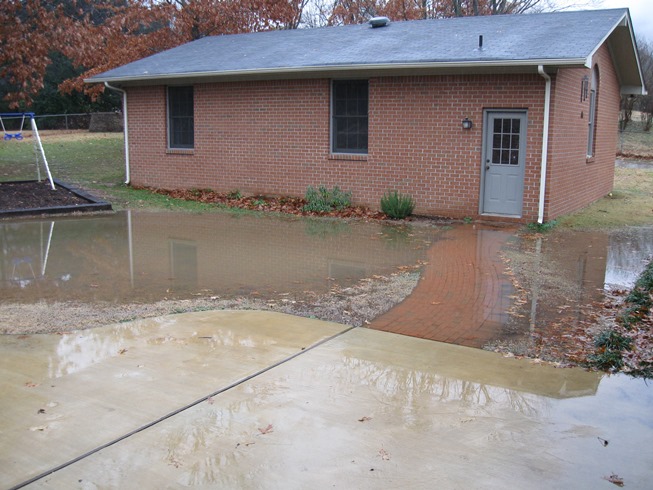 Ever since adding an addition on to the back of our house, we have had issues with rainwater draining out of the backyard.  The water gets high enough to flood the sidewalk on one side of the shop, and seep under the boat bay's big door on the driveway side.  Until recently, this was a brief annoyance during spring flooding.  But we have had unusually wet weather the last few years lasting well into summer, and I'm now tired of the continual mud & flooded walkways.

The root problem is that water from both our yard and a neighbor's now wants to drain down the Shop-side of the house instead of most of it gravitating to the opposite side and draining without consequence like it originally did.  To make matters worse, we lost a huge hackberry tree in the backyard several years ago which used to absorb a lot of the groundwater.

Around three years ago I had a crew come in with a track loader, and scrape a better drainage path in front of the shop.  Although their efforts somewhat improved the drainage situation, the manner in which the scraped-up dirt was redistributed around the side & back yards caused other problems. This was particularly annoying because I had spent a lot of time discussing how much dirt to put where with them, and the conversation had obviously been forgotten by the time they came back to do the work.

So, just before the next year’s growing season, I rented a small backhoe/loader, and put the dirt where I wanted it. After that, peat moss was tilled in before running an improvised drag harrow across the area to smooth & de-lump the soil. 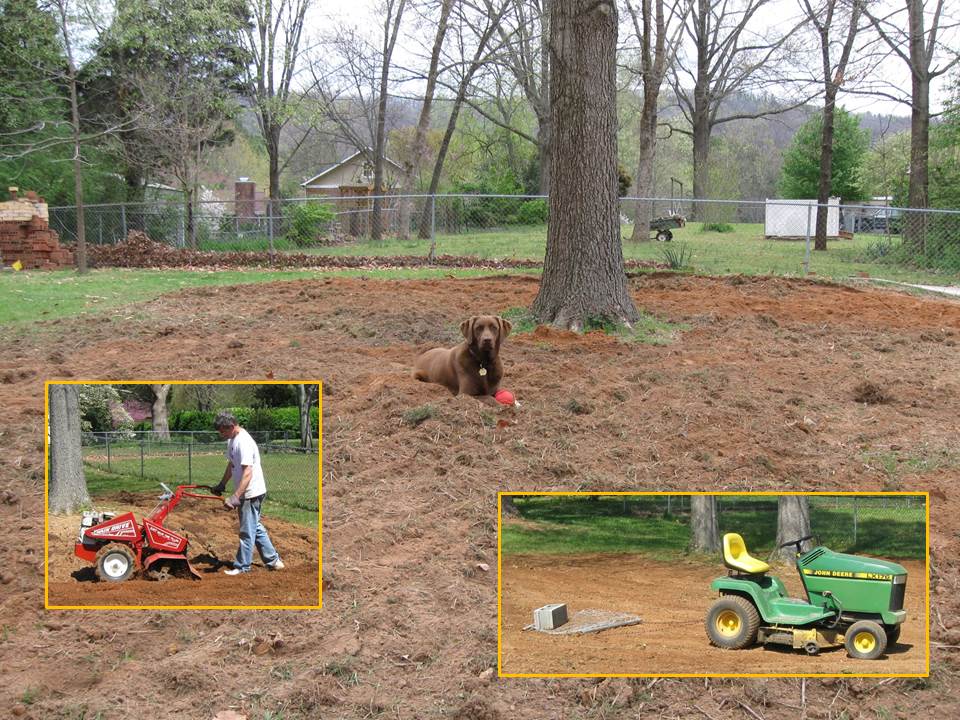 The subsequently seeded fescue grew remarkably well, and for a while it appeared all was well.

But in time, the water started rising around the shop again.  After standing in the rain… again… trying to figure out a permanent solution, I found the silt that was accumulating in the drain paths was coming from two separate locations.  The first and easiest to deal with was from the north side of the shop where the shade of two oak trees does not allow much grass to grow.  This has actually been a problem for a long time, and I apparently thought magic grass would sprout one day and keep the dirt in check.  After waking up to reality, I built a retaining wall like I should have done long ago: 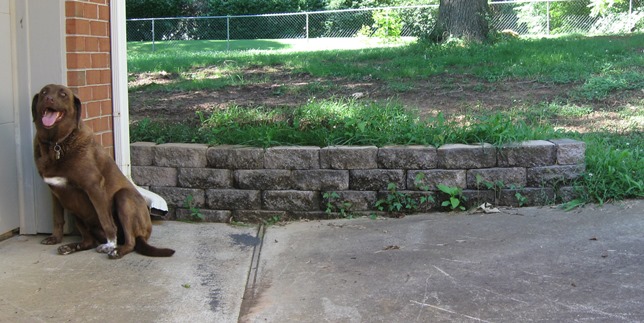 I was happy to have the blocks already sitting around because, believe it or not, that short length of wall is made of $65 worth of block at today’s prices.  The “settled” look the wall attained in a short time was realized by sprigging it with weeds pulled out of the driveway & sidewalk.

The second water/silt entry point was from my neighbor’s yard.  I believe when her house was built in in the early seventies, most of the yard’s rainwater drained into the ditch which runs along my side yard.  But over time, as evidenced by the dirt held back by the chain-link fence I had built in ’95, erosion had taken its toll, and the runoff found a shorter path by draining into the middle of my yard.

As a first step, Daniel & I built a low retaining wall alongside the fence which spanned the length of the erosion.  The effort spanned about 80 feet. 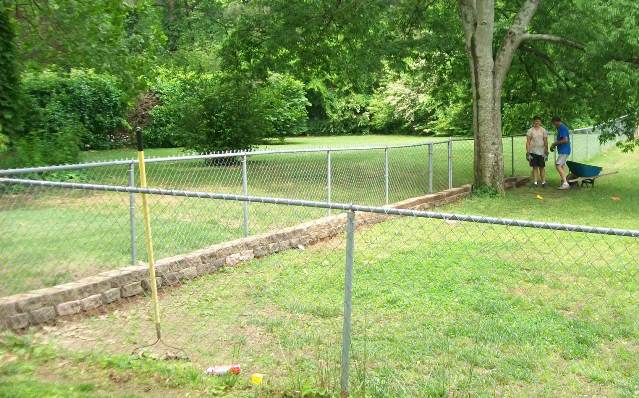 As expected, though, after shooting a few elevations, it was obvious that the wall in itself was not going to resolve the drainage issue.  Both my yard and my neighbor’s yard had changed too much over the years.  A drainage pipe from the retaining wall to the ditch was going to be necessary. 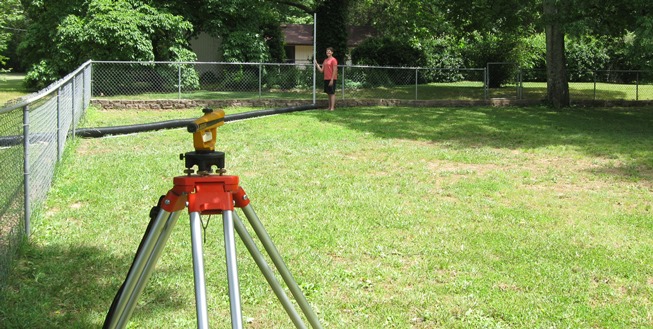 During the wall’s construction, I noticed the lowest spot corresponded with where the tree we lost had stood.  With that location as a starting point, the ditch as the destination, and a goal of avoiding major tree roots, a six-inch corrugated drainage pipe was laid out.

After confirming the start point was higher than the end point (slope was 0.2 inches/foot), the pipe’s 110 foot path was marked with spray paint. 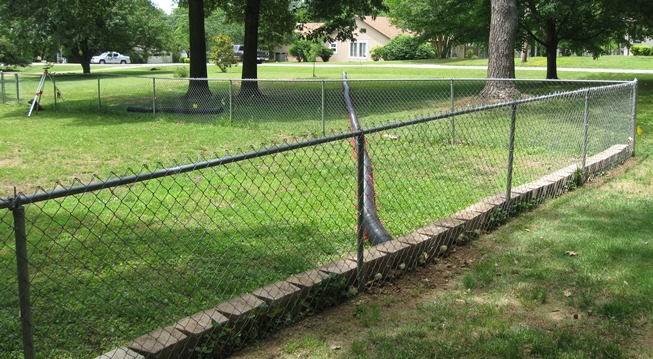 I headed off to the rental yard with the intent of coming home with a small backhoe like the one I used last time.  But the yard also had a track hoe/loader for rent, and the man at the front desk agreed it was probably more suitable for my task.  The down-side was that the machine is controlled by joysticks instead of levers and a steering wheel like I was used to.  But I eventually got the hang of it. 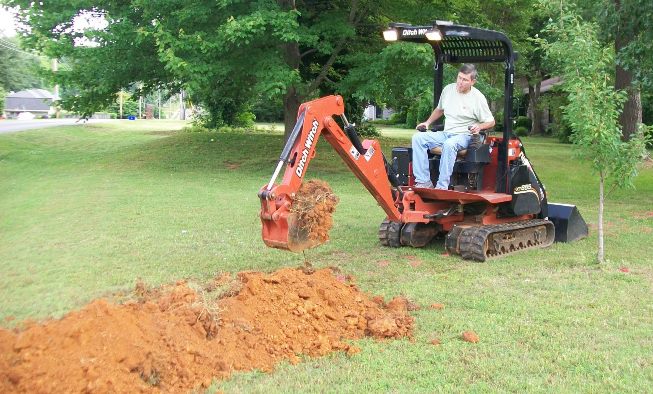 Although you cannot tell from this picture, the trench’s depth got down to 26 inches at one point 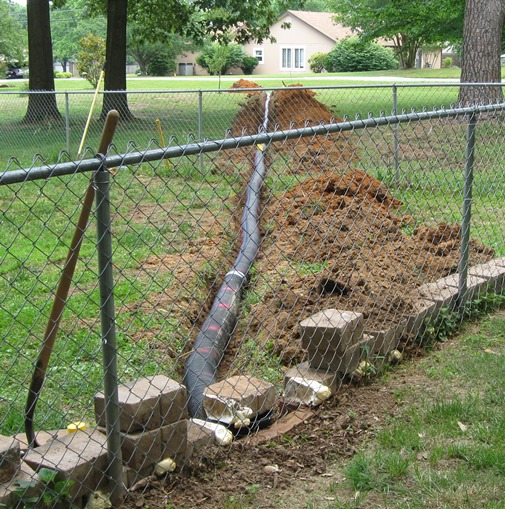 Oddly, none of the home improvement stores had a pre-made storm grate/catch basin for sale.  My solution was to cut a hole in the side of a thick plastic planting pot for the pipe and concrete the buried pot in place. 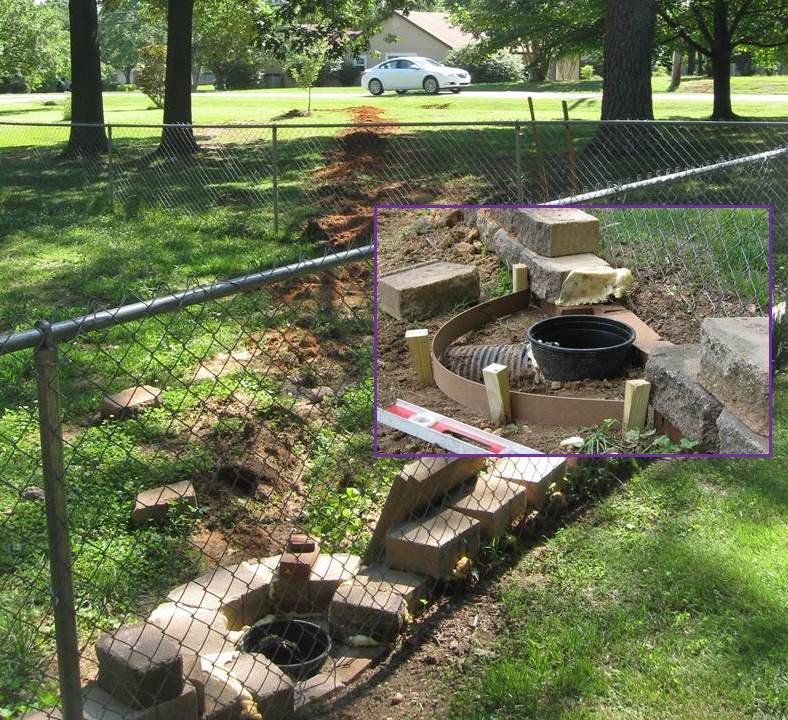 The concrete was cast just high enough to support the lower course of block on level.  Plans are to cast a concrete, semicircle-shaped cap to cover the basin.  Hopefully, the chain link fence will be adequate for keeping big chunks of stuff/varmints out of the pipe.

Even though a reasonable amount of time was taken studying close-out photos of the yard’s sprinkler installation, I still snagged one of the zone feeder pipes with the track hoe, and ruptured it in three places.  Since the repair, I’ve been running that zone fairly often in an attempt to get the dirt to settle on in the trench. 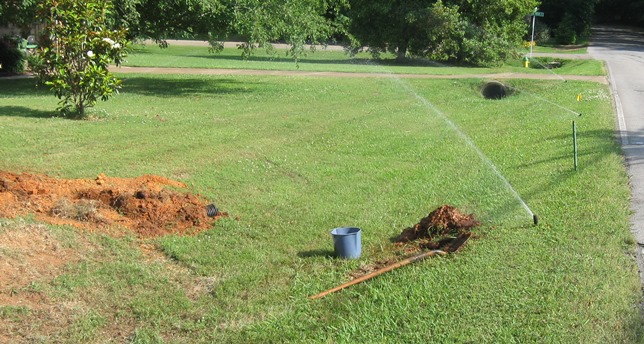 While the focus of the day’s effort was getting the drainage pipe buried, there was enough time left in the day to scrape some of the excess dirt up from various places around the shop.  In the image below, my back is to the small retaining wall. 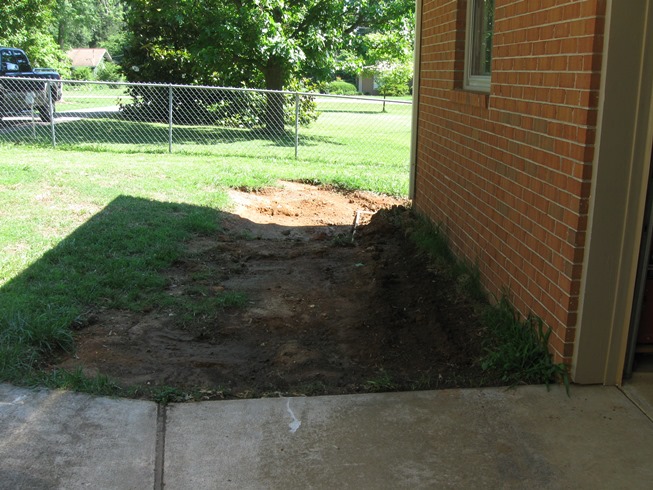 I snagged a sprinkler line there, too… So much for MY advance planning.  Plans are to roto-till the scraped areas before smoothing & seeding.

While there is still much to do, I’m happy to say that we had a gully washer a few days ago everything drained great.  The long retaining wall at the fence channeled water to the new pipe where it drained smoothly into the ditch.  The shop driveway drained nothing but clear water, and in spite of how hard it rained, water never got close to the boat bay door.

Hopefully this will be the last time drainage will be addressed in my yard.