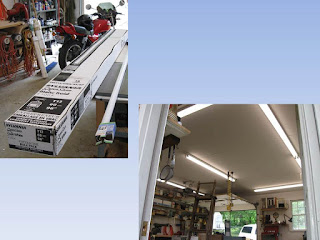 My shop is illuminated by a total of 16, eight-foot-long, fluorescent tubes plus task lighting where necessary.  Long ago I made a rule to always replace the tubes EN MASSE when the first fixture went dark simply because I know the lights have a pre-determined life span, and I did not care to be CONSTANTLY repacing bulbs mounted on a 10-foot-high ceiling.  This plan has worked well for me since I get six to seven years of tube life between changeouts.

A light went out last week.

Unrelated, Kim handed me a five-dollar-off coupon the other day that was good at the orange home improvement store until tomorrow on purchaces over $50. I opted to spend the windfall on new tubes.

While I already knew there were at least six intensities of fluorescent light, the store's selection puzzled me due to the phenomenal amount of obviously returned product. I assumed everyone had returned home with the wrong color of light.  Not a problem here - I was there for my shop's original design goal of Cool-White light.

Due to prices always going up I ended up paying $89 for a 16-count box of Cool-White tubes.  No problem; the tubes' subsequent installation was supposed to be the end of this tale and not the price.

But after opening the box of new lighting, I found "they" have introduced a new kind of 8' bulb connector which does not not work with my shop's fixtures.  Apparently, my shop's lighting NOW falls under the "commercial" category.  Fortunately, the store took the product back, and refunded my credit card.  I then went to the blue home improvement store.

The blue home improvement store had a much better layout. Sadly, there were puzzles there too.  In addition to all the open, vertical displays of individual fluorescent tube offerings, there were boxes of "Contractor-Sale-Only" boxes of the tube which fit my shop's needs lying prone on the floor.  The problem was that each box only had 15 tubes instead of the 16 needed.  Go figure since fluorescent lights usually follow The Rule of Two doctrine, (known as Chwayatyun in Sith language and also called the Banite system).

But the Contractor Box of 15 was only $49, a marked difference from $89.  A pack of two more IDENTICAL lights was only another nine dollars for a roughly $30 dollar savings over the other store.  I can throw away the extra bulb, should I want to, and still save money over buying a box of 16 tubes from anyone.

To summarize, I saved ~$30 by purchasing the product needed to illuminate my shop since I could get over a variety of packaging.