Yet Another A/C Repair


2012 will go down in our family’s history book as “the year of one refrigeration repair after another”.  The cooling season opened up with the Suburban being out of refrigerant due to a leaky compressor seal.  As the temperature went up, the house’s air conditioner went down four times, and the Airstream blew a refrigerant line on our way to the Florida Keys.  A small window A/C from Home Depot set in the doorway saved that vacation.

Fortunately, by the end of June the breakdowns subsided, and after several out-of-state camping trips confidence had been restored in the Airstream’s 45 year-old air conditioner.

Earlier this month, I was finishing loading the Silverado in preparation of a family trip to Disneyworld/Fort Wilderness when I noticed a spot in the bed just big enough to accommodate the window A/C.  Mentally going back & forth with myself, although no problems were expected with the camper’s A/C, the unit was loaded simply because I knew how mad I would be if something were to go wrong and we did not have the unit even though there had been space for it.

On every trip we have made to Florida, the Airstream’s air conditioner always sweated on one side, and the condensate would drip on Daniel’s comforter.  Just before this trip, I had finally looked at the issue (after a mere eight years), and determined that moving one of the unit’s two condensate drain holes would probably resolve the issue. 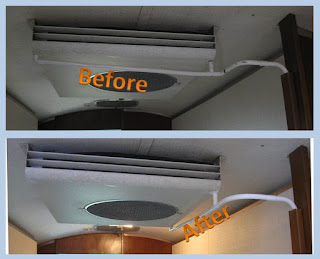 It did.  All was well until mid-way through the trip, when we returned from one of the Disney parks to hear the fan motor making a terrible racket.  After verifying there was no easy fix to the noise, the window unit once again came to our rescue. 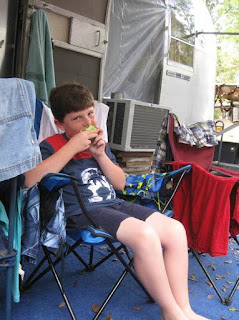 The annoying thing was that the fan motor was only eight years old, and its bearings should have lasted a lot longer.  Luckily EPCOT’s seasonal Wine & Food Festival helped take the edge off the situation. 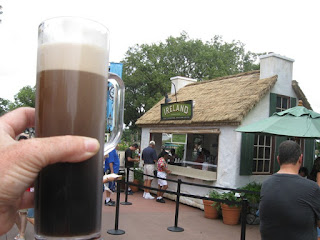 Other than the trouble of stepping around the air conditioner in the doorway, the rest of the vacation was, as expected, a lot of fun.

In a “first” for a Disney trip, we made the trip back home in one 13 hour drive instead of splitting it into two days.  While everyone rode amazingly well for our longest family drive ever, we were all happy to be home.

The only real bad thing about towing with the Silverado is having to take precaution against gear loaded in the bed getting rained on.  When the vacation-saver was initially loaded before the trip, it did not appear to me that a little rain would hurt anything.  So it got to sit in the bed uncovered.

The first time it was plugged in at Fort Wilderness, the unit would not come on.  No idiot light, no nothing.  Nowadays, window units have GFCI’s built into the plug to protect the consumer from electrical shock due to water.  It had a “test” and a “reset” button of which neither would do anything.  After consideration, the plug was shaken, and it sloshed.  Oops.  And, I did not have the right tool to dis-assemble the device to dry it out.

Daniel was close by and I asked him to unplug the six-foot extension cord while I got wire-working tools & duct-tape out.  After cutting the GFCI plug off of the unit’s cord, and the outlet off of the extension cord I proceeded to strip wires to join the two cords together.

Daniel’s eyes got wide and he asked, “Is that safe?” to which I replied, “You did unplug the cord, didn’t you?”

He slowly nodded, and moved away.  I guess that was the first time he had ever seen bare wires. 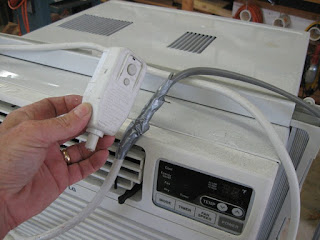 While the duct-tape worked fine, a more permanent repair will be made before the unit’s next use.

While spraying rusty unions with WD-40 before disassembly is always a good idea, the A.O. Smith-brand motor I installed right before the Overlander was returned to operation did not put up much of a fight. 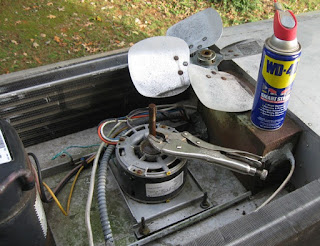 After inspection, I can’t decide exactly why the motor bearings went out.  Maybe they needed oiling more often.  Maybe it was running gear imbalance.

A Fasco-brand motor was chosen as a replacement.  If nothing else, its bearings looked better sealed against the elements than the old motor’s. 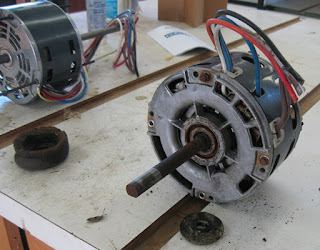 The new motor installed without any problems, and cool was once again returned to the Airstream.

Just in time for the cool to leave the house’s refrigerator after it iced up. 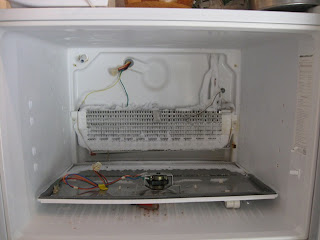 The problem was traced to a defective defrost heating element.