Last August, when I decided to take over servicing my ’84 Suburban’s air conditioner, I wondered how long my first A/C repair would last. Had Alex Trebek been involved, he might have asked, “What is six months?”

No regrets though. During my repair’s tenure, the A/C blew so cold that heat had to be mixed in for the first time during several of our subsequent camping trips. 2011’s Airstreaming season ended on a high note.

The Mighty Suburban was rotated into service last week to get me to work. On the way home, the weather was warm enough for air conditioning. When no cold air came out of the ducts, I really was just not surprised - The Suburban’s A/C has not worked for the first use of the season for the last three years. Lack of refrigerant was the reason every single time. The last shop repeatedly blamed the leak on a loose high-side conversion fitting installed by them during the R12 to R134a changeover. As a consequence, I was never charged for refilling the system with refrigerant. But part of the reason for taking charge of A/C work was to eliminate “like clockwork” visits to repair shops.

After hooking gauges up a few days ago, readings indicated “no surprise” number two – extremely low refrigerant level. It was time to identify/permanently repair the leak location since I am on the hook now for the $70 worth of refrigerant needed to cool our primary tow vehicle’s interior.

As an aid in diagnosing future problems, the A/C’s system was refilled during the August work with refrigerant oil containing a dye visible under ultra-violet light. The premise was that since oil & refrigerant flow through the system somewhat together, any leak in the system would allow both oil & refrigerant out. UV light would expose the leak path via the leaked oil. 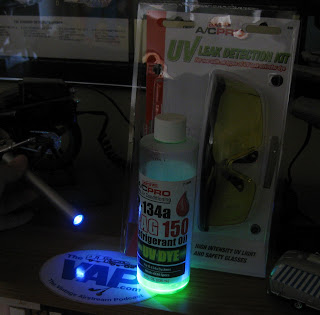 $15 for the UV leak detection kit was a more than reasonable price to me to pay simply because a perceived side benefit was “wowing” my 12-year-old with the concept of UV light, a scientific phenomenon that would have stymied me in the 6th grade. Sadly, no joy for me – he immediately filled me in on what kind of light had been shined on his arm before I could even start a spiel, and described some of its potential uses. Today’s schools are doing a great job.

“No surprise” number three was the UV light being a bust at IDing a leak path. The most questionable component was the compressor shaft seal, and it is obscured by the clutch. But no glowing trails from all the easy-to-get-to areas confirmed that a satisfactory job had been done installing all the new stuff during my first foray into A/C work. Even the conversion fitting consistently blamed by the last shop multiple times passed inspection.

The first compressor Danny installed for me many years ago came from the best rebuilder available at the time, and lasted for a more than a reasonable amount of time. Sadly, when it needed to be replaced, unknown to me Danny had switched to a vendor who supplied no-name-brand compressors. Several of these compressors had to be installed before finding one that would last more than a trip or two.

Had I not had to tool-up for A/C service, this last compressor might have been replaced last August. But between the compressor’s solid gauge readings, and the effort’s initial tool-up costs, compressor replacement was deferred.

Fortunately, a friend had a refrigerant sniffer he was willing to loan me to confirm the leak’s location. For good measure, the entire system was sniffed with the effort culminating at the compressor. As expected, the sniffer went off-scale high every time the probe was placed anywhere near the shaft seal. 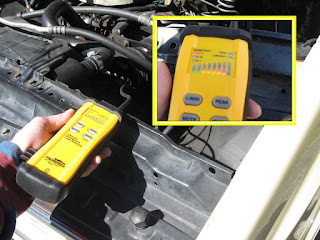 It would seem cut & dry at this point to replace the compressor & refill the system with refrigerant – I have all the tools necessary. But parts alone could get as high as $460, and with gas prices only expected to rise above an already high cost, we have had discussions on what to tow with this season.

While everyone loves the Suburban, my Silverado is more than capable of towing the Airstream, and it gets considerably higher gas mileage.

I’ve still got a few weeks before something has to be done. Maybe gas prices will go down before then. I can always hope!