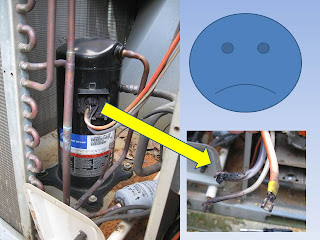 Our family was fortunate enough to have both sets of the Boyz' grandparents plus Kim's brother over today for Sunday lunch to celebrate our oldest boy being confirmed into the Methodist church. The low-key meal of grilled burgers with all the fixings & fellowship was enjoyed by all.

Later, after all the relatives left, I noticed the house's air conditioner had quit running in spite of the thermostat asking for more cool. After a brief checkout, the unit's outside circuit breaker was found to be tripped. Not good - when this happened two or three seasons ago, the compressor was found to have shorted internally.

The breaker was reset only to immediately pop out again. Dead short; just like last time. Not good - Kim was briefed at this point & advised to locate enough money to cover a new unit should it become necessary.

After dis-assembly, the situation looked grim. The wires connecting the compressor to the unit were quick-fried to a crispy crunch. But after a closer look, it appeared one of the wires had been making a poor electrical connection for a while.

Since there was nothing to lose, the wires were cut back to good wire, and new connectors were crimped on & installed on cleaned-up compressor terminals.

Success! A serious financial bullet was dodged.
Posted by TomW at 6:54 PM