You may recall that the Mighty Suburban’s air conditioner quit while coming back from the Hot Springs, AK trip. Danny’s shop installed another remanufactured compressor in time for our next trip a couple of weeks later to Stone Mountain/Six Flags in Georgia at no cost. Sadly, the replacement compressor only lasted long enough to get us there. Older son Daniel & I, though, managed to stay cool riding the new Goliath rollercoaster. 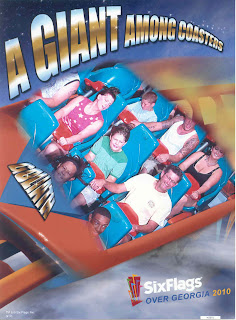 Kim & Jared decided they’d rather sweat. Departure day saw us leaving the campground at 4:30 a.m. to beat the heat during the four hour drive back home.

The next day, Danny installed another compressor, and kept the truck extra time just to make sure everything was okay. I’ve been driving it to work this past week just to build up my confidence in the latest repair because we’re headed to the Smoky Mountains at the end of the month, and the engine will have enough on its mind pulling some of the grades without having to tolerate the latest compressor smoking up the place like the last two did. Hopefully, the problem was just a slew of bad, remanufactured compressors. While remanufactured compressors have treated me well in the past, I’m done with them now, and if the Suburban’s current compressor craps out tomorrow, a brand-spankin’-new one will be installed.

This past Saturday I was running errands in the 98 degree heat when the Burb’s rear AC unit fan motor suddenly spun up to a super-fast speed. Thinking a fan wheel had simply come loose, the unit was switched off. But the particular sound didn’t sit right with me, and a few blocks down the road the radio was turned off & the air handler switched back on.

Hmm, lotsa air blowing out – something it wouldn’t be able to do with a loose fan wheel. The only thing that can make a DC motor spin faster is more voltage. A quick check of the dash voltmeter, and GAAH! To my chagrin it was pegged out past 20 volts. The fan motor was immediately switched off. Fortunately, I was within sight of my next stop, a grocery store, and was able to quickly pull in and get the engine shut off.

Figuring the alternator had ended its tenure with a flourish, I decided to go ahead and grocery shop to give the engine compartment time to cool before diagnosing the problem further. Seemed safe enough because all I was probably going to do was to pull the quick-disconnects on the wires going to the alternator for the four mile trip home, and that would take 10 seconds tops.

After shopping for, and stowing the goods, the next reasonable thing to do was to start the engine, and see if the problem was still there. Or try to start the engine. The key was turned, and nothing – no dash lights, no ‘click’, no anything happened. But the overhead light still worked. After popping the hood and tracing wires, a fusible link was found to be the culprit. The problem now was that I had neither tools nor parts to affect a repair. But I did have a wife at the house, so I called home. No answer. Tried her cell phone; no answer. Hmm, I’ll bet they’re over at the neighbor’s swimming pool. Called there – line was busy. Repeat the above – no luck.

Things were now starting to get tense because one of the purchases was a case of cold beer, and the heat wasn’t doing it any favors. Reassessing, my options appeared limited to either purchasing a cheap knife from the grocery store to cut & strip a wire from a non-critical circuit to use in place of the bad part OR sit on the tailgate and drink beer until either Kim got home or Joy got off the phone. After losing two coin tosses, I went with the first option.

The truck fired right up afterwords, and the voltmeter’s indication returned to normal. The beer had been saved. So had the night’s meal of fresh chicken leg quarters & everything else.

Daniel & I hopped on the motorcycle mid-Sunday morning in search of sanctioned repair parts, and added 30 miles to the odometer doing so. With better preplanning, I’m sure the mileage could have been reduced. But the fun of cruising with one of my Boyz doing guy things would have suffered.

The toasted fusible link’s temporary solution was replaced later that afternoon with new parts, and enough time was left to address another casualty of the Hot Springs trip - the broken gear selection indicator. 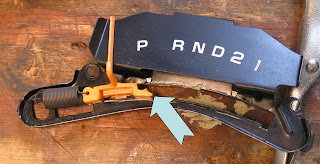 The root problem was simple - A little plastic hook (where the arrow is pointing) had broken off. But new pointers are no longer available for General Motors’ products built in 1984, and chances are a plastic pointer repaired with steel will last longer than a used one from an automotive junkyard. My trusty compound milling table got to help with this effort since the hole being drilled was so small. 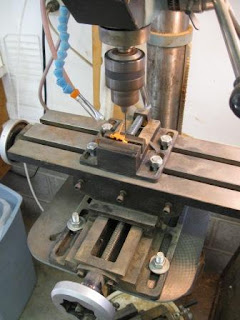 The pin could be trimmed to fit after the epoxy cured-out Sunday night. 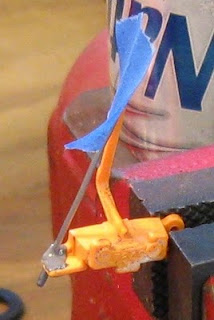 So O’dark-thirty Monday morning found me behind the wheel of the tan truck reassembling the dash because I wanted to drive the truck for a few more days to make sure the AC would hang with me.

The re-assembly went without a hitch, and after a quick shower my primary tow vehicle appeared ready to get me to work in the still-dark morning. The Mighty Suburban fired right up, and with satisfaction I could clearly see the truck was in “Park”. In the now subdued outside light I could also clearly see the right-hand turn signal dash light illuminated for no apparent reason. Flipping the turn signal lever up made the blinker audibly ‘blink’, but the dash light remained unfazed.

Upon further investigation, neither of the rear turn-signal/brake lights nor the right-front turn-signal light were found to be in working order. Since the lights had all worked prior to my MacGyver imitation in the grocery store parking lot, the assumption is that the high voltage burned them out. It made sense – I had to brake before signaling a RH turn into the parking lot.

Having neither time nor new light bulbs to address the issue forced me to switch vehicles and leave the Burb in the driveway. Firing the Silverado up, I was just about to put it in gear when a funny noise was heard coming from under the hood. But the noise stopped before it could be fully identified. My first thought was that some varmint’s nest under the hood was being thrashed about since the truck had been idle for several days. After moving a few feet down the driveway, the noise came back. While checking the dash gauges for signs of trouble, I noticed the interior wasn’t getting any cooler. Yep, it appeared the Silverado may need a new compressor. The AC was switched off, and I continued on my way with 2-60 air conditioning and no more strange noises.

Later, at work, someone came up and told me my elegant solution to one of last week’s problems was not working.

The day, thankfully, did not get any worse at the office. Danny was out sick so the Silverado’s NEW compressor will have to wait. The auto parts store had new light bulbs for the Suburban in stock. But it started raining on the way home from the store, and I was on the motorcycle.