It Was Time for Better Reception

Although my Overlander came with a factory-installed, VHF antenna, I opted for a UHF bowtie antenna for our adventures because it was much smaller, and UHF stations were more common around here than VHF.  When all of the TV stations were required to go digital, my Airstream was good to go because digital TV frequencies are in the UHF range.

But it appears that many stations are broadcasting their digital offerings with less power.  My simple bowtie, on multiple outings, just was not up to the challenge.  So Santa delivered a new, digital, RV antenna from PPL last Christmas. 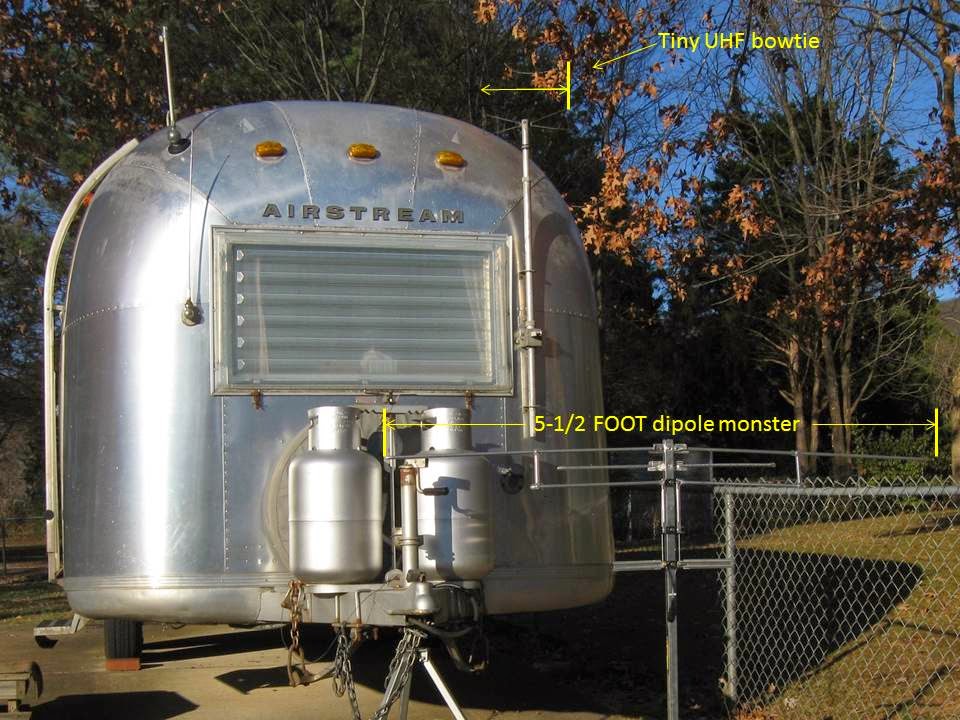 The swap-out was relatively easy.  The only issue was the mounting pole.  The original was round, and the new one was square.  Since I wanted to use the Overlander’s antenna rotator, my buddy Dan machined me an adapter. 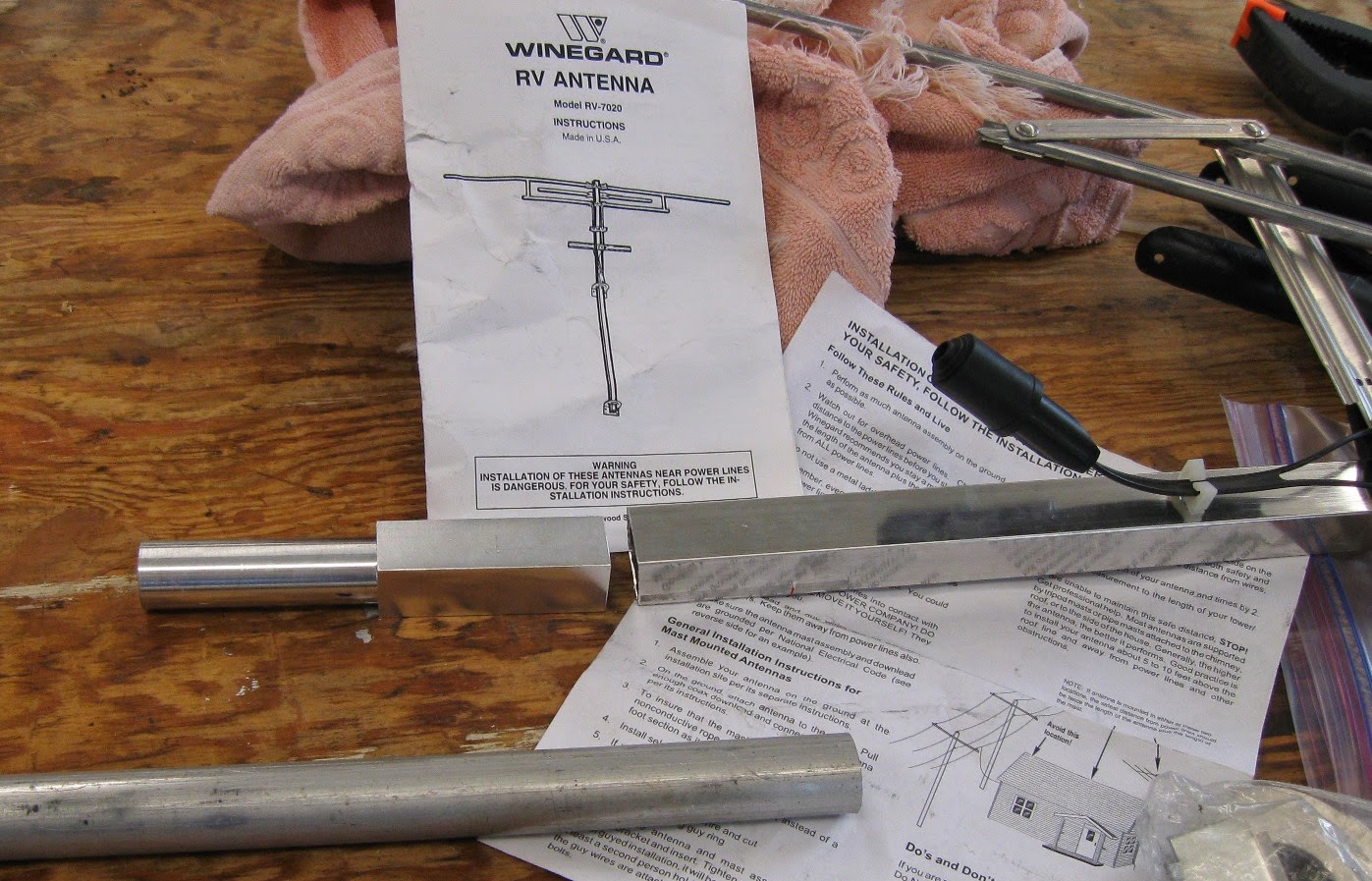 What a difference!  Up to this point, we have never been able to pick up local stations in the driveway because there is a mountain between us and the transmitters.  But the new Winegard picked up all of them PLUS their sidebands PLUS Public TV.  I was impressed. 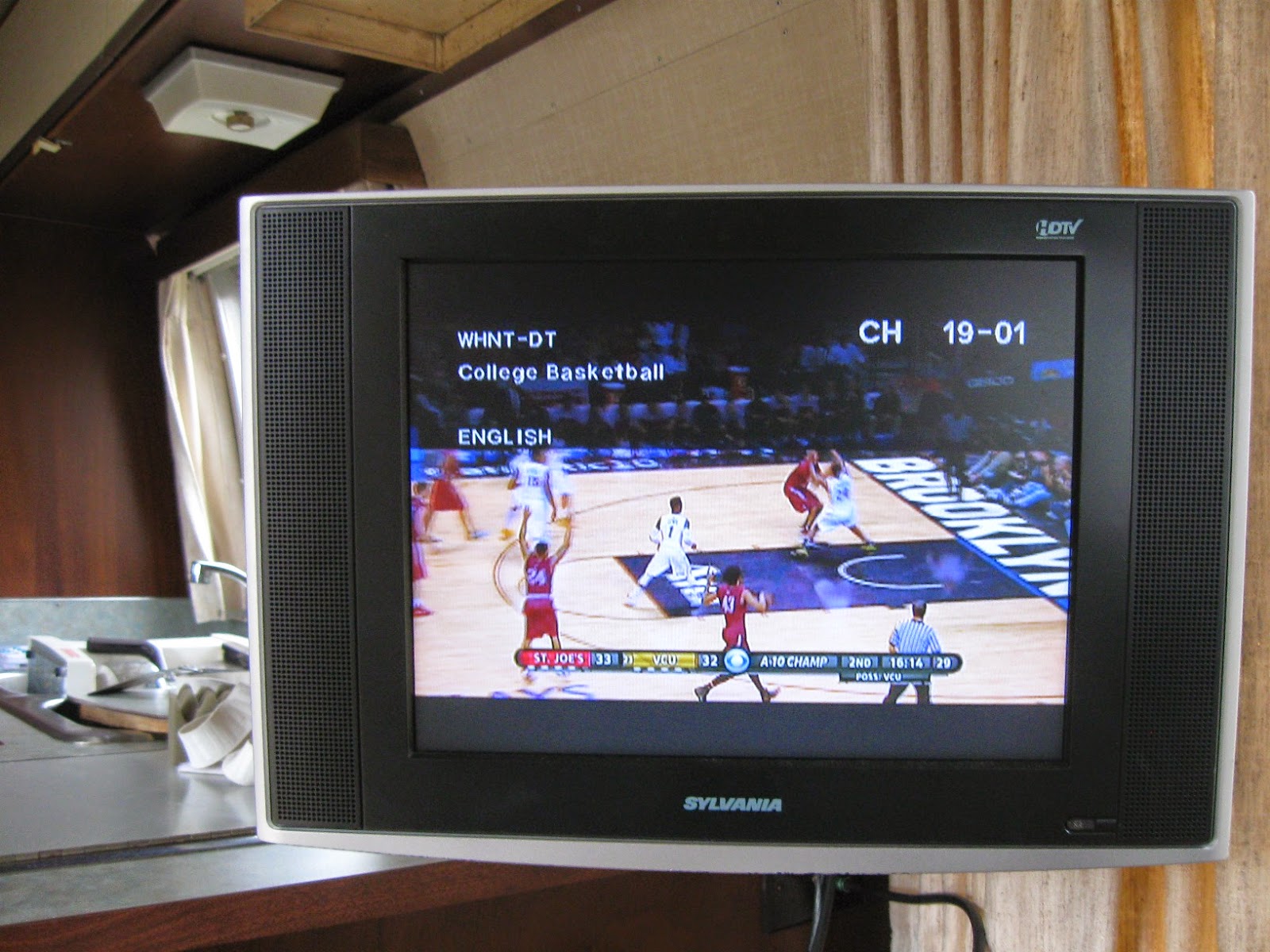 We used the new antenna on last week’s trip to the beach to monitor the weather, and Kim was one happy camper. 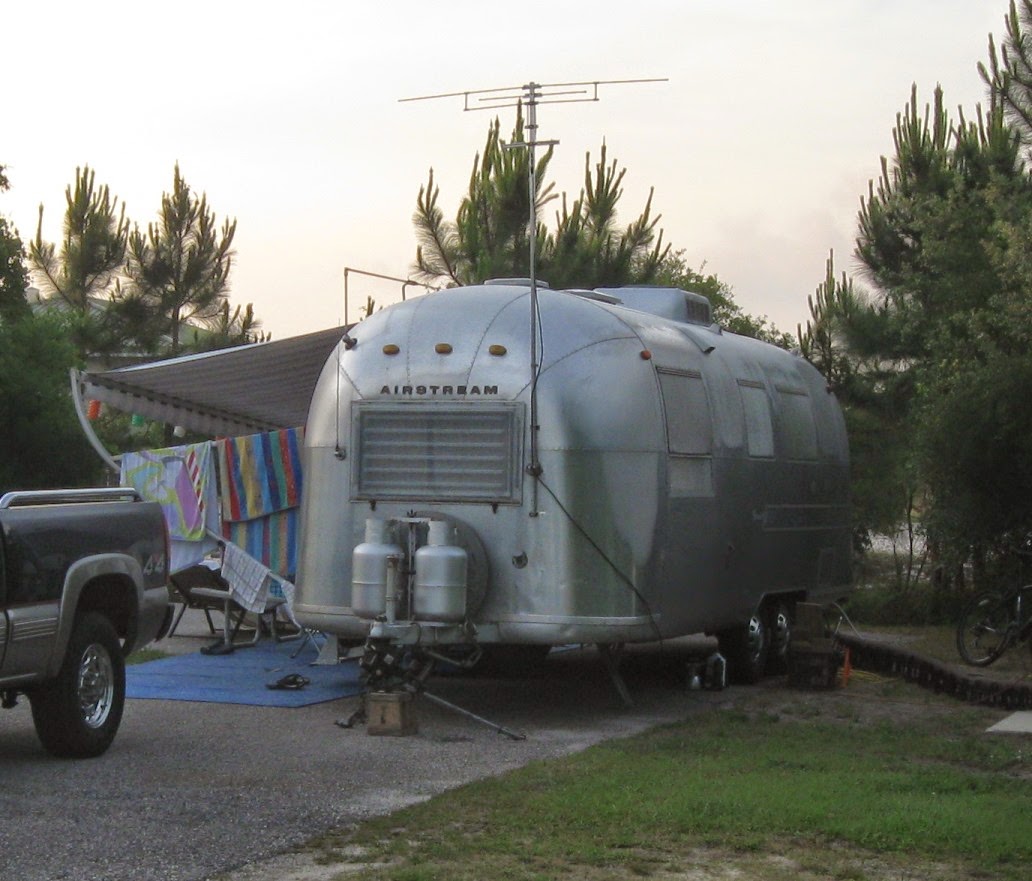 While not quite as unobtrusive as the bowtie, it does fold up well. 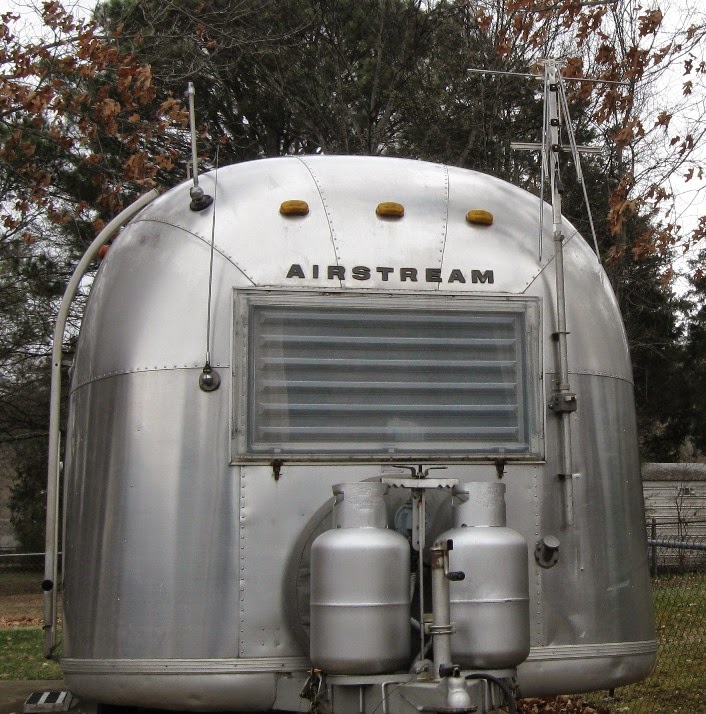 While packing for the beach trip, I noticed the Airstream’s original TV antenna sitting quietly in the corner, and moved it into the Shop for a better look.  It was bigger than I remembered.

Remembering that the same mountain that interferes with TV reception also hampers reception of Public Radio on my Shop’s, I wondered if that big ole 47 year-old antenna would work better than the existing, simple dipole thumb-tacked to the wall. 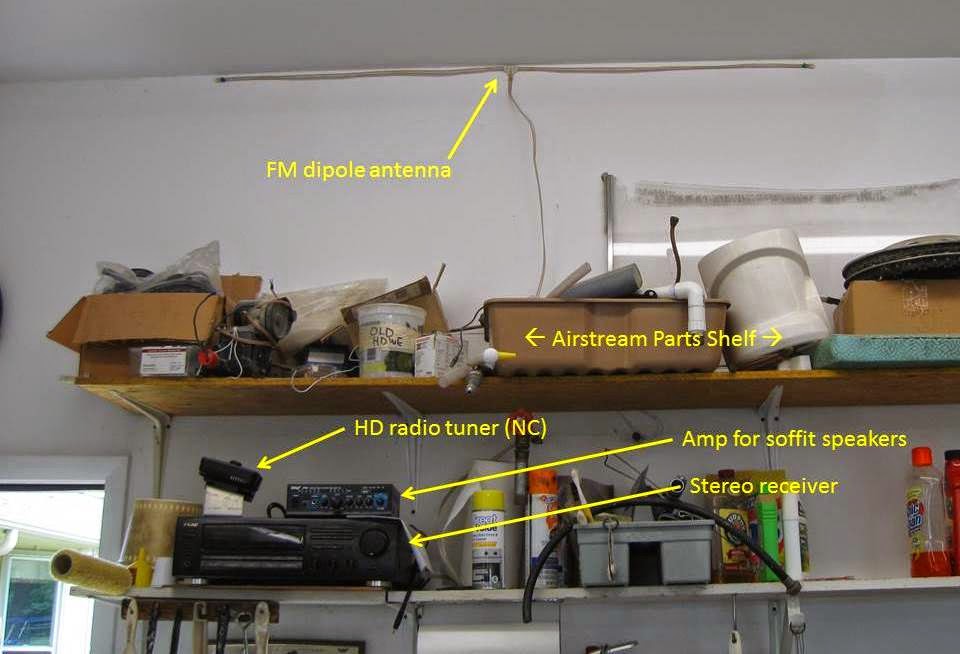 Since the Shop’s ceilings are 10-feet tall, the decision was made to mount the antenna to the ceiling.  Rough cherry works well for FM applications. 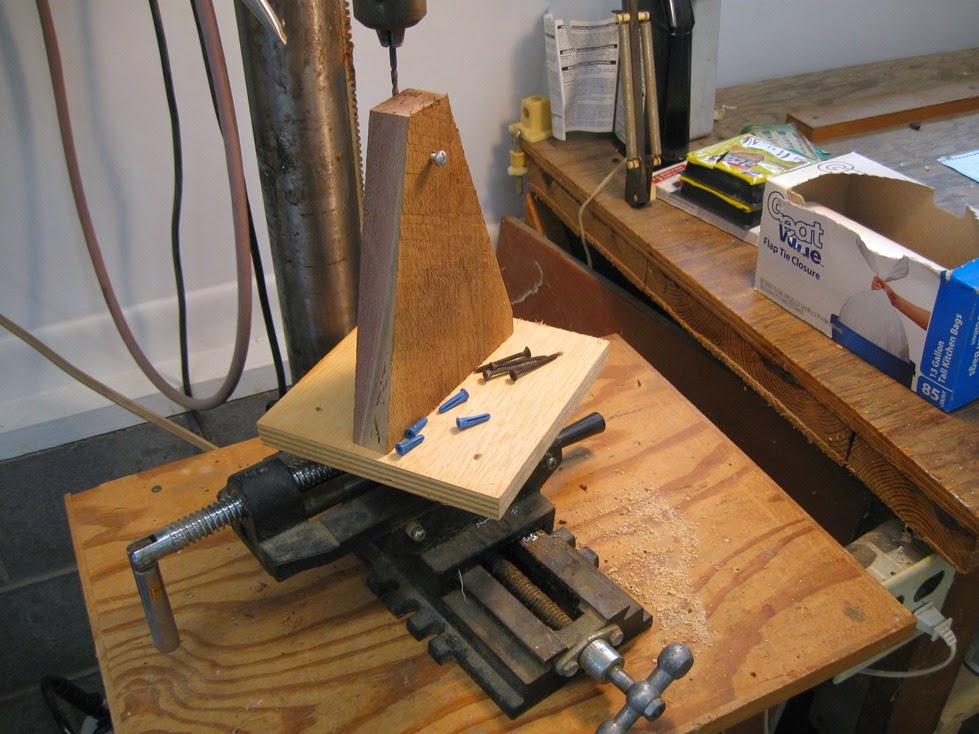 The mount’s placement was chosen based on the unfolded-out size of the antenna.  After screwing the mount to the ceiling, and then unfolding the potential super-station-getter, I found that the antenna’s 8-foot span would not be realized with the mount where it was.

Fortunately, it was easy enough to relocate the mount to the other side of the light.

Success - The results were worth considerably more than the effort.  Although the antenna itself does not bother me, the wire does.  I might, one day, run the wire through the attic space.  If I end up going to that much effort, I will probably relocate the antenna there too while I am at it.

But the next project will probably be to connect an HD radio tuner to the Shop’s setup I have that did not work well in my truck.  If it works well, I might just have to get another old Airstream antenna for the truck.