Earlier this year Dave, over at Dave’s Cupboard blogged a recipe for transforming corned beef into pastrami.  Click here to read it.  Dave used to blog a lot about home charcuterie, and between that & my love of pastrami I knew this would have to be the recipe to try.

The immediate problem for me in making the dish, though, was that I did not have a proper slicer.  Since there was no way I was going to slice it thin enough by hand, plans to make my own pastrami were pushed to the back burner.

Last month when Mrs. Claus hit me up for a Christmas list, “meat slicer” popped into my mind.  From past fast food experience I knew that nice slicers are expensive.  But the Internet now lists several brands of home-duty slicers all for around $100 each.  While I knew Dave already had a nice slicer, and probably little current knowledge of cheap slicers, I emailed him anyway and asked his opinion.  He replied back with some brand names to stay away from, and a brand name he would try if he was in my situation.  Christmas day found me unwrapping a new ChefsChoice slicer.

Only corned beef points were available at the stores I visited, and the pieces were kind of small after allowing for shrinkage.  So I ended up buying 6-1/3 pounds of meat in two bags at a reasonable $2.88/pound. 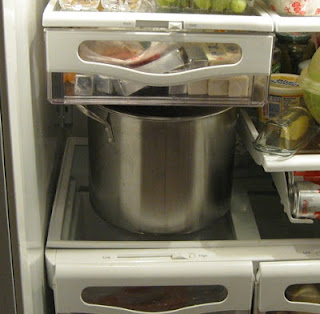 The spices were coarsely ground Friday night so that everyone would not have to listen to the spice mill at 3:00 a.m. Saturday when the points were rinsed, patted dry, and pressed with Dave’s public blend of six herbs & spices.

The beef was allowed to come to room temperature until it was loaded into my Brinkmann smoker around 6:00 a.m.  While my preference for an outside temperature would have been for something higher than that morning’s 35 degrees, you can’t always get what you want.  Maple wood was used for smoke.

Around four hours later the meat temperature hit the wall at around 160 degrees.  After wrapping in aluminum foil the beef was finished off in a slow house oven.  After hitting ~165 degrees the meat was pulled out and allowed to rest until its temperature started dropping.

Since it was so cold outside, the pastrami was moved to the cold gas grill and set underneath a fan out of an older ceramic heater to get it chilled enough for easy slicing. 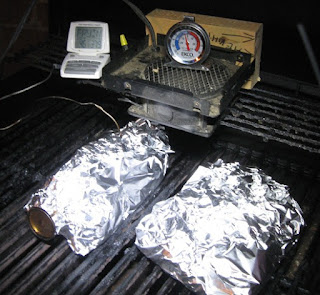 The pastrami was just plain perfect! 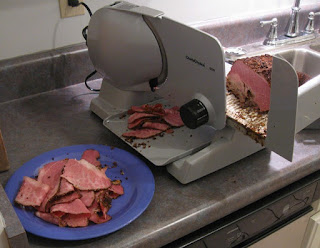 The meat looked fantastic, and tasted even better.  The soak was warranted – I thought my first pastrami had the perfect amount of salt.  The Boyz & I enjoyed it warmed with rye bread, onion rolls, provolone cheese, and spicy mustard.  Kim enjoyed watching us eat it as she feasted on something else.

While I would not want to run a deli with this particular meat slicer, for occasional home use I think it is a good unit to have around.  It had sufficient power to cut the meat, and cleaned easily.  It does have a lot of plastic parts, so I had to be careful about pushing the meat flat against the fence as rigidity is not its strong suit.

I got tickled, though, the first time it was switched on.  The unit has a universal motor, and the blade hooks up to it via a geared reduction box.  So until you look & see the blade spinning considerably slower than a commercial unit’s, the motor’s noise makes for a fairly intimidating presentation.  But it got the job done.  As long as the blade stays sharp for a reasonable amount of time, I am going to consider the slicer a good deal for the money.

On the flip side, the slicer will probably be worn out by slicing Dave’s pastrami on a frequent basis.  Should that happen it will be replaced with a sturdier unit – Dave’s pastrami is worth it.