After purchasing a huge pressure fryer many years ago, I looked long & hard for a reasonably priced, natural gas standalone burner to hook up to the patio grill’s gas connection since none of the kitchen cooktop outlets were sized big enough to heat the pot effectively.  Surprisingly, there really wasn’t a selection available, and the fryer ended up being heated by an LPG-fueled turkey cooker burner from the home improvement store.

The Internet did have a few tales of people using the burner out of an old water heater for outdoor cooking but no one had posted any pictures.  Since the whole idea sounded like a great way to re-purpose parts I hoped to one day try it out.

I got my wish the week before Christmas when Kim called mid-morning to tell me our gas water heater was leaking water from the top. 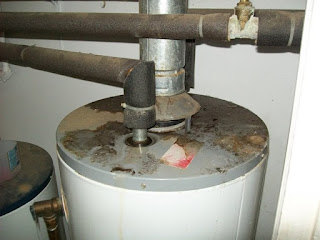 With 17 years use on an eight-year warrantee I couldn’t complain.  But I did start complaining about how slow the 40 gallons of water was draining until compressed air was hooked up to the opened relief valve to speed the operation. 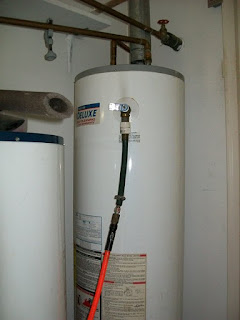 After that, though, it was smooth sailing.  I even had time to replace the leaky shut-off gate valve with a new quarter-turn ball valve before the Boyz got home from school. 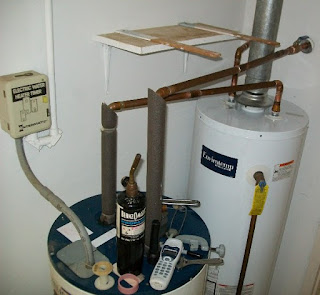 The old water heater’s next stop was my shop where the burner assembly came out with very little effort. 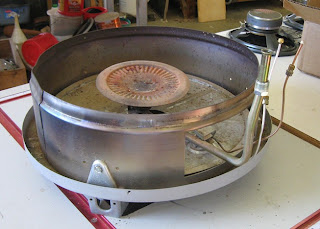 The burner itself was in great shape as was the tank bottom which contacts flame.  Although it makes sense, it surprised me to find the metal was better than 3/16” thick. 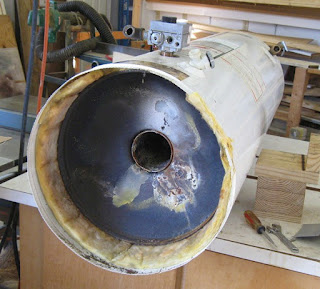 A box of spare parts provided a gas hose from an old grill for the effort.  After borrowing the charcoal rack from the Weber grill, my latest cooking accessory was one step closer to being realized. 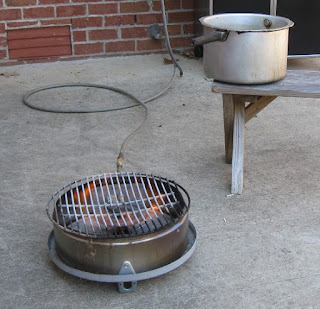 Sadly, though, it is not to be.  Or, at least, it was not to be for this particular pot.  The burner’s flame pattern is too diametrically dispersed – most of the heat swirled out along the sides of the post instead of heating the bottom and looked like it was going to toast the handles. 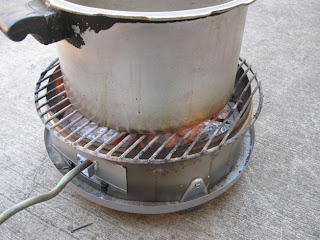 If the flame’s pattern been more suitable, a needle valve would have been procured for heat control.

The burner would probably be perfect for heating a cast iron wash tub from the days of old.  Hmm, I should probably hold onto the burner for a while; ya never know.

On the bright side, now the Internet has pictures of an old water heater burner being used to heat a pot.