One of the bonuses included with the purchase of our house 17 years ago was most of a Brinkmann smoker. With the subsequent purchase of a new charcoal pan, Kim & I enjoyed several years of slow-smoked brisket, pork butt, and whole chicken. After the Boyz were born, though, we found that grilled burgers & hotdogs had more overall appeal. As a result, the smoker’s use diminished considerably.

The Boyz are now older, and Daniel in particular has appeared to enjoy some of the meat I have cooked over low, indirect heat on both the charcoal, and gas grills. The other weekend, Kroger had ten-pound bags of leg quarters on sale for the ridiculously low price of 39¢ a pound. Between that and a break from the rainy weather which has occupied every weekend of 2012, the time seemed right to experiment again with the smoker.

For this effort, the chimney starter was filled halfway with charcoal, and topped with big chunks of hickory. 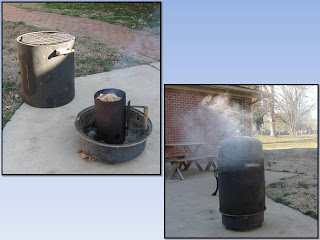 When smoking meats, I lean more towards dry rubs than marinades. For this particular meal, the leg-quarters were rubbed down with olive oil before being sprinkled with a homemade variation of Emeril’s Essence, followed by a light dusting of a granulated & confectioner sugar mixture. Most dry rub recipes call for brown sugar but I’ve had trouble with it clumping & not distributing well over the meat. White sugar goes on more uniformly, and is not distinguishable to my bourgeois palate.

The poultry was then arranged on the smoker’s top rack after being allowed to sit at room temperature [gasp!] for several hours. 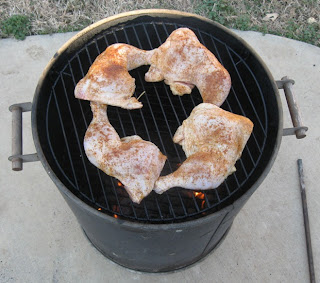 One of this smoker’s selling points is the “moist heat” which comes from a four-quart pan of water suspended above the coals. Although the pan was, lo these many years, always dutifully kept full of hot water I never thought that, other than throttling the heat a little, it did much, if anything, for the effort. Knowing when to wrap the meat in aluminum foil always had a bigger effect on how moist & tender the effort was going to be.

Out of a combination of general curiosity, a smaller fire than usual, small pieces of meat, and the outside temperature being in the 50’s, no water pan was used for the first time ever with great results. 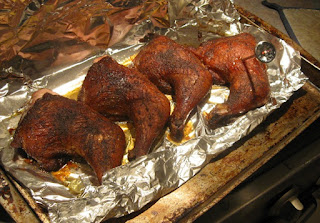 There are no plans to throw away the water pan, though. While pleased with the way this meal turned out, I’ll wager the big hunks of meat that require longer cooking times need a barrier against the direct heat.

But all bets are off should I find beef or pork at 39¢ a pound.